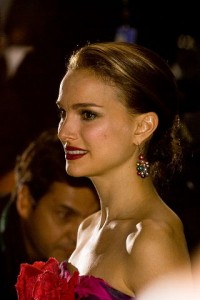 Natalie Portman has weighed into the debate over women on film in an interview for the forthcoming edition of Elle UK.

The actor has expressed her opinion that feminism is more than women being ‘kick-ass’ on screen, and that she would like to see a world where every single construction of a man and woman is possible on and off screen.

‘I want every version of a woman and a man to be possible. I want women and men to be able to be full-time parents or full-time working people or any combination of the two. I want both to be able to do whatever they want sexually without being called names. I want them to be allowed to be weak and strong and happy and sad — human, basically. The fallacy in Hollywood is that if you’re making a “feminist” story, the woman kicks ass and wins. That’s not feminist, that’s macho. A movie about a weak, vulnerable woman can be feminist if it shows a real person that we can empathize with.’

These are timely and admirable remarks for a Hollywood star to make. The implication of what Portman discusses in her interview is that rather than the Lara Crofts of the movie-world, truly feminist characters are those who are scripted in such a way that incorporates personal dynamism, complexity, agency, and perhaps even a sense of realism.

‘We need get away from the idea that sexism in fiction can be tackled by reliance on depiction of a single personality type, that you just need to write one female character per story right and you’ve done enough.’

Jezabel lists Hanna, Hunger Games, Sucker Punch, Salt, Dragon Tattoo, and Wanted as examples of movies where this occurs. There are plenty of films out there where male characters are represented in simplistic, one-dimensional roles – I would say that Arnold Schwarzenegger stars in a few. But then there are scores of films where female characters remain in support roles, or barely appear at all, and are often predictable according to comedy, rom-com, and action. The boundaries of genre will bend, and change overtime, but as they do it is worth thinking about what the outcome is we’re looking for.

McDougall says, ‘Let us remind ourselves that the actual goal here is not the odd character who’s strong or effective or anything else. It’s really very simple, but it would represent a far more profound change than any amount of individual sassy kickassery can ever achieve, and would mean far fewer posters like those above. Equality.’

McDougall wants to see the male to female ration on our screens shift from 3:1 to 1:1. Quite reasonably, McDougall yearns for a full gamut of female protagonists and support characters, including those who are strong, weak, or neither, who are complicated, interesting, shy, and tolerant. This of course doesn’t have to occur in the one character in the one film. It shouldn’t. What would really achieve equality is a diversity of character representation across the entire movie-spectrum – as in – the blockbusters too.

In the Elle UK interview Natalie Portman declared that her favorite movie of all time is Dirty Dancing. To quote a famous line from the film that summarises this discussion, ‘Nobody puts Baby in the corner.’