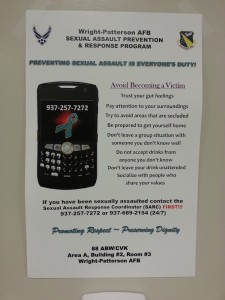 Shifting the blame from perpetrator to victim in cases of sexual assault is so deeply ingrained in our society that it is difficult at times to maintain the energy to confront those perpetuating victim-blaming myths.

I’ve had to challenge close friends and family members who have sworn they’re ‘not victim blaming’ but why the hell would you ever go back to a footballer’s house after everything you’ve heard about them? At a public lecture, I’ve heard a judge speak of the unsavoury nature of ‘young women’s drinking habits these days’ and further, claim that preventing this behaviour could very well prevent sexual assault from occurring. And who didn’t have a co-worker or relative mutter something under their breath about Jill Meagher ‘stumbling home alone in the dark’?

Love is all around us. And so is victim-blaming.

And so it is within this context that we encounter the USA Air Force Base’s Sexual Assault Response Coordinator’s leaflet campaign  ‘Preventing Sexual Assault Is Everyone’s Duty! Avoid Becoming a Victim.’

According to the sexual assault support service set up on the Air Force’s base to support victims, women should:

Still having fun ladies? Or are you in the corner of your local pub darting concerned looks at all strangers bearing drinks and slyly watching your co-workers who you’re really not that sure share your values while making sure you know where the fire exists are and simultaneously trying to work out how the hell you can get home in a cab when ohmygod, cab drivers are strangers too?  Worst of all, you know if you miss any of the above steps…it will be your fault that you got raped. Because we can all avoid becoming a victim by following this cheat sheet right?

Hang on a second you say. What’s so wrong with advocating ‘risk management’ for women? Journalist Sarrah Le Marquand believes it is the right of every woman to be empowered by informing herself about ‘risky behaviours’:

In Australia it is, as it should be, the right of every woman to drink, enjoy herself and stay out as late as she chooses…But it’s also the right of every woman to take on board statistics and expert knowledge so she can better equip herself in reducing the likelihood of running into danger. We don’t, and never will, live in a utopian society where sexual violence is non existent. It’s not victim blaming to acknowledge that. It’s just common sense.

On the face of it, arming women with information about safety and risk factors sounds somewhat reasonable. But it’s so much more complex than that. And also, at the same time, so much more simple than that.

You see, more sophisticated feminist writers than I could talk far more eloquently about rape culture and victim blaming. And they have. But for those not as intimately familiar with these feminist concepts, it might seem somewhat complicated and convoluted and the questions will still remain…but why walk home alone? Why get so drunk? Why follow a group of men into the bedroom? After everything we know…why would she do that?

How to tackle such beliefs? For me, it’s as simple as applying Caitlin Moran’s simple feminist test: are the men doing it? Why? Because it’s both simple and frighteningly illuminating; posing that question in circumstances that are making your brain explode (victim blaming vs risk management) is a way of cutting through crap.

If avoiding rape is everyone’s responsibility and risk management is the way to go, are the men doing it? Why are we not advocating risk management for men? And by that I mean, where are the posters for men at risk of raping women? Where are the posters challenging their thoughts? Their beliefs? Their actions? What risk mitigation strategies are in place on that Air Force Base to judge the behaviour of men before, during and after a sexual assault?

None. Because such a trusty cheat sheet would look like this:

Preventing Sexual Assault Is Everyone’s Duty! You too can avoid Becoming an Offender!

The day we see these posters on our walls is the day it is ok to also see posters on the wall arming women with risk management strategies that will ‘prevent’ men from perpetrating sexual violence.

Do you think arming women with information about sexual assault ‘risk factors’ is victim blaming? Or just plain common sense?

Have you ever questioned the circumstances around sexual assault? Let us know in the comments below!