the battle and the war: tyler the creator and rape culture in australia 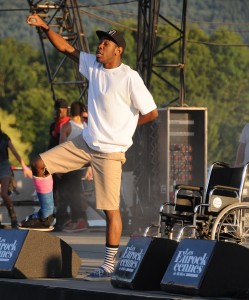 Tyler, the Creator performing (via Wikimedia)

On Monday, Los Angeles rapper Tyler, the Creator – real name Tyler Okonma – took to his twitter to tell his 2.48 million followers, ‘T IS NOW BANNED FROM AUSTRALIA, YOU WON @CoralieAlison IM HAPPY FOR YOU <3 [sic]’.

Coralie Alison is the Director of Operations at Collective Shout, a movement against the objectification of women and sexualisation of girls. Calling his lyrics ‘misogynistic hate speech’, Collective Shout claim the messages in Tyler’s songs ‘pose particular risk to the Australian community’, citing numerous examples from his songs with implied or explicit references to rape, holding women captive and murderous violence. They have been demanding that the immigration minister, Peter Dutton, prevent Okonma from returning to Australia for his planned tour dates in September.

Now, in naming Alison as the reason for not being allowed to re-enter Australia, on a social media platform in which he has a substantial following, he has inadvertently proved why his visa application should be reviewed.

Since the tweet was published on July 27, Alison has been on the receiving end of a barrage of tweets promising to kill and rape her, even threatening that they ‘know her address’.

The biggest kicker: he hasn’t even been banned from the country. Okonma’s tour promoter, Frontier Touring, issued a statement on Tuesday denying the claims. ‘With respect to media reports that Tyler, The Creator’s visa has been refused, Frontier would like to advise that this is not the case,’ the statement said.

But despite confirmation that he has not yet been denied a visa, Okonma has yet to respond to the hurricane of hate he carelessly sent towards Alison, and there are doubts he ever will.

In all of this overwhelming mess, Alison has kept her head high and hasn’t retreated. On Wednesday she took to Twitter to share her feelings on the matter stating ‘the most chilling part about receiving rape/death threats via twitter is knowing that real women are being raped and murdered RIGHT NOW! [sic]’

And she is right. Threats of violence towards women are not confined to 140 characters. In Australia, statistics from the Not Now, Not Ever report show that one in three women will experience physical violence in their lifetime, and furthermore, almost every week in Australia a woman is killed by her former or current partner.

In fact, according to numbers from Australian police services, the police deal with an estimated 657 domestic violence matters on average every day of the year. That’s one every two minutes.

This is why Collective Shout is campaigning to block Okonma’s entrance into Australia. It’s about creating a culture where this behavior and this language become unacceptable. They are attempting to stop a rape culture from being further proliferated and profited from in our modern Australia.

Ashley Jordan at The Humanist provides a great definition of rape culture: ‘Rape culture is an environment in which rape is highly prevalent, normalised and excused by the society’s media, popular culture and political figures. Rape culture is perpetuated through the use of misogynistic language, the objectification of women’s bodies, and the glamourisation of sexual violence, which creates a social culture that disregards women’s rights and their safety.’

Melinda Tankard-Reist, founder of the Collective Shout told Fairfax that by directing his fans directly to Alison – and the subsequent reaction from his fans – only strengthens their fight. ‘We don’t understand why Australia has a national plan of action to address violence against women and yet we roll out the red carpet to artists who glamorise and eroticise that violence,’ Tankard-Reist said. ‘We think its hypocrisy to give Rosie Batty an Australia Day honour and then grant a visa to a performer who says rape is fun.’

It would be easy to just dismiss Okonma as just a performer coming to play a few shows on our shores, but it’s much bigger than that. Okonma, with his 2.48 million followers, has influence over society and its culture. His lyrics, his tweets and his behaviour normalise certain behaviors that just don’t belong in this time.

So yes, fighting back against song lyrics may seem trivial to some, as there are bigger battles to fight. But it’s the little battles like this – the everyday sexism – that makes fighting the big battles so much harder, and ultimately so much more important.