the male gaze on the female body: artist andy golub 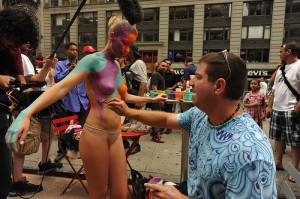 American body artist Andy Golub has caused a bit of a stir in the media of late with news of his models being arrested for public indecency. But what interests me in Golub’s art making practice is the interaction between these paint-clad models, who are often naturalists, and the spectators. Don’t get me wrong, I have nothing against naturalists, or the naked female form, or art that involves the body. And the laws in America agree with this thinking, so long as the nudity is pursuant to a play, performance, exhibition or show (according to Ron Kuby, the lawyer for one of the models who was arrested). 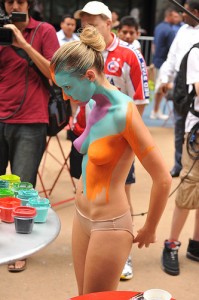 So what is it about Golub using (mainly) women as his canvases, that makes me feel just a little bit queasy? It’s the way that these models are treated by the spectators that doesn’t feel quite right. Yes, a lot of the spectators who stop to watch Golub paint are tourists or those who may actually be interested in what is being created, but it’s the middle-aged men with cameras who follow Golub all over New York to watch, photograph and film these performances that I have issue with. It is the few minutes between the models removing their underwear and Golub covering the skin with paint that are of concern, as this crowd of men attempt to take photographs from a camera held low facing up between their legs. If these models consent to acting as nude canvases, are they also consenting to having these photographs taken of them? 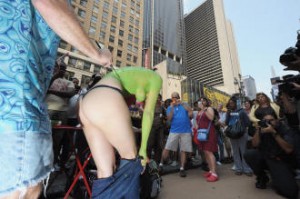 Some models who had previously agreed to be a part of Golub’s project, despite being naturalists, raise concerns about these videos and photographs once they get to the performance and cannot go through with it. Particularly when locations such as Times Square in New York are chosen, where it can be difficult to control the crowd around the models. It is also impossible to control how these crowds view the models or the images they take away with them on their mobile phone, cameras and other recording equipment.

A Harlem-based rapper called Un (real name Andrew Tate) has been quoted as describing Golub’s painting of naked women in public places as: “a free way for a guy to get his rocks off. It’s like Crayola porn. It’s a graffiti strip club without the mutual understanding and respect of a real strip club. I do see an artistic value in this and I think it’s good for things to be open, but there is clearly exploitation here. The problem is that this crowd is not interested in art; they just want to see the flesh, the body. They’re stuck on the tits and ass. They’re waiting to see if she’ll get her pussy out and maybe spread it a little.” Clearly not all of the spectators are interested in the artistic aspect of Golub’s work.

After being painted Justina, one of Golub’s models, a 42 year old Naturist was quoted as saying: “it’s a little weird to see the wall of cameras, especially when many of them are pointing down there. Why I wouldn’t think that it would be like this, I don’t know. Some people could be judgmental and say Andy isn’t really getting his message across because people just see this as a gimmick. But I think if we keep doing it and keep doing it, it could become another genre of art. So, we just have to be the people who get judged or gawked at, and in ten years another generation of artists can just do this as a normal thing.”

So if these models know what they are getting themselves in for, is this then ok? 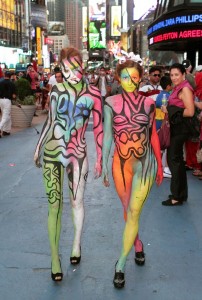