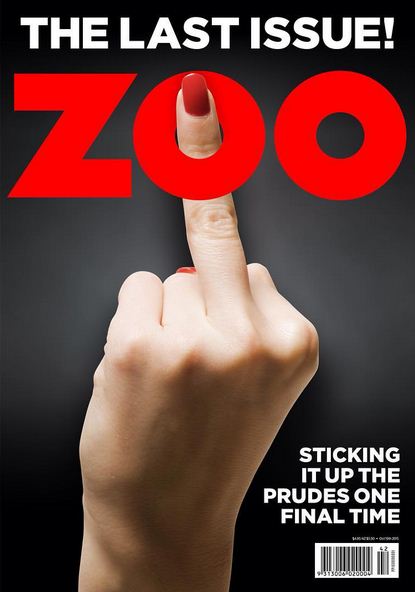 Zoo’s decline was a slow and agonising one, suffering first from a terrible case of plummeting sales numbers. The magazine’s publisher, Bauer Media Group, attempted to treat the immediate symptoms by removing it from the ABC circulation auditing figures to avoid disclosing the gloomy totals that would inevitably foreshadow a bill of bad health. Zoo then took a near-fatal blow from the harmful effects of a Change.org petition, banning it from the shelves of Australia’s major supermarkets by arguing that it promoted sexism, sexual violence and used the language of rapists.

After having suffered through so much adversity at the hands of left-wing progressives and feminist advocates, Zoo Weekly began displaying self-destructive tendencies, pushing its prognosis further into more pessimistic realms. In 2012, Zoo was forced to tragically cancel a competition they had launched to find “Australia’s Hottest Asylum Seeker”. It was accused of exploiting the experiences of refugees by inviting asylum seekers to send ‘pics and a short story about your tragic past’. To promote the competition, Zoo photoshopped the face of Greens Senator Sarah Hanson-Young onto a lingerie-clad model. It was these disheartening acts of self-immolation that led to the magazine’s quickening fatal decline.

Finally, surrounded by the tear-stained remainder of its three-person readership, Bauer Media Group finally pulled the plug on the 17th of September and allowed Zoo to die with dignity, amongst the laughter and joyful cries of women and liberal activists everywhere. During the funerary services, Bauer Media Group delivered a glowing eulogy, saying ‘the staff has done a great job on Zoo Weekly over the years and I commend their work and thank them for their dedication and effort.’ It appears that these very staff members were sued for misappropriating the word ANZAC on their April 25th cover by picturing a bikini-clad model with a poppy weaved between her breasts. Despite this omission, it was a fitting farewell.

Zoo Weekly will be remembered for its inclination toward rape glorification, the objectification of women and the death of editorial sensitivity. We regret to see such a tasteful publication go tits-up.