what is her name? : cordelia 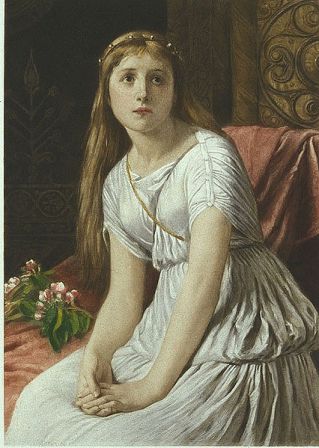 ‘What is Her Name?’ is a series of short essays that explore the reality of what it means to be a woman living in a patriarchal world. Each essay takes the name of a woman whose place in history or in culture serves as a platform for examining different female experiences. The accumulative aim of this work is for women to be able to name our struggles, our achievements and our hopes. The work asks society to listen, to question and finally, to change.

‘Bid them farewell, Cordelia, though unkind:
Thou losest here, a better where to find.’ – Shakespeare, King Lear Act 1

Not acting in a manner that is expected or demanded of women has experientially and historically resulted in women being punished, abandoned and ridiculed, even by those she believed loved her. This happens in family units, social circles and most definitely in the workplace. Recently I managed to see a three-hour production of King Lear twice in the space of two weeks. The second time, in the far back of the auditorium (due to ticket pricing that would make your eyes water), my thoughts lingered on that opening scene. It’s a play that really does capture an epic portrayal of all manner of human fragility and failure but what intrigued me was the story’s catalyst.

The play’s famous opening scene depicts the ageing Lear dividing his Kingdom between his three daughters by means of competition; a flattering admission of their love in return for a healthy slice of the empire. As Cordelia refuses to play the game her father demands of his daughters, she stands against the most pure and archetypal figure of patriarchy: “The Father” and “The King”. In return she is shamed and she is banished, denied inheritance, comfort and love.

The desire to please in order to avoid punishment has ruled so much of female activity – ‘Better thou had’st not been born than not to have pleased me better’ (thank you very much). Why then would any of us speak out or act out, when so typically the result is a loss of comfort and safety? No one wants to be banished, to land on hostile shores (no matter how handsome the King of France may be). So how gods’ do we attempt to find our voice and give volume to that voice when so often the response is overwhelmingly hostile? How do we overcome the fear of speaking out, when every day we face an army of oppression that attempts to banish the female voices that sing above the white noise of the status quo? There is a quiet and painful expectation of behaviour in so many areas of female life. It’s an insidious thing. How do we speak out and change things for ourselves when the attempt is almost certainly going to cause us pain and discomfort?

Lately I have been devouring feminist literature, written by both men and women, with such an appetite it would seem I have been starved of something for years. Which, of course, I have. I have been starved of access to strong female opinion, women talking about the experience of being women and men talking about the experience of being a man within the patriarchy. I have been hungry for women to heave their hearts into their mouths and articulate the core pain that exists in the choiceness act of being female. I have craved the expression of an anger I wasn’t sure I was allowed to feel. I have hungered for the permission to exist: in pen and paper, history, fiction and in politics, the permission to struggle against gender roles and expectations, the permission to feel suffocated and exhausted by beauty standards and casual sexism.

The understanding that I was not alone in my belief that there is, there must be, something better than this is the most encouraging experience I am yet to have – A better where to find. And all this, this new desire to speak out and search for this better place, has come about because I began to listen to other women; I started to trust them and their experiences. I started to read their words and devoured their stories. I realised they were just as valid as the male voices I had been paying attention to for so long. Other women are our single biggest source of information, of inspiration and liberation and consequently, of bravery. So with CORDELIA I name everyone who has ever lost something by simply being true to themselves and daring to defend it; those who speak what they feel and not what they ought to say. We will gain more than that which has been taken from us. And we won’t simply find a better place, we shall forge it.

Anna is an actor and emerging freelance writer based in Melbourne. She has written one play for The Q Theatre in Sydney, a smattering of short stories, and many love letters for her fiancé.