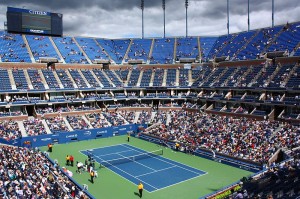 After Stan Wawrinka bowed out of his second round match against Nick Kyrgios at the Rogers Cup, I wondered if they’d shake hands. The post-match handshake is sacred but it can convey either deep respect and friendship or stewing loathing and passive aggression. They did shake hands, likely because Wawrinka hadn’t heard the comment Kyrgios tossed his way earlier in the match, insinuating that his rumoured girlfriend (also a tennis player) had slept with another man on the tour.

The Association of Tennis Players (ATP) fined Kyrgios $12,500 and placed him under investigation. He’ll face a 28-day suspension from all ATP events plus an additional $25,000 penalty if he fails to meet a set of conditions over the next six months. Kyrgios has since said it’s a just punishment.

Boos followed him on and off the court in his third round match against John Isner in Montreal. Was it the inauguration of a new ‘bad boy’ of tennis? Depending who you ask, he’s the type of player the sport needs – or can and should do without.

His comment was petty and unnecessary but casting the 20-year-old Australian as tennis’s new villain is a slippery slope. I’m dreading the rest of his love-to-hate-him narrative because I know how the tennis world reacts to aberrations on the court– from Dustin Brown’s dreadlocks to Serena Williams’s dominance.

I’m not a sports fan but I became a fan of tennis. While hockey inspired uncomfortable patriotism and basketball fickle loyalties, tennis offered a constellation of battling talents and personalities. I knew some of the key people – Venus and Serena Williams, Andre Agassi, John McEnroe, and then eventually Roger Federer and Rafael Nadal – if not their stats.

For a brief period this Canadian summer, tennis became a distraction from the isms of daily life. But social tensions and prejudices play out in sports just as well as anywhere else. Williams has been the target of those isms for decades and the past season was no different. Poised to become the first woman since Stefani ‘Steffi’ Graf to hold all Grand Slam titles in a calendar year, more eyes are on her than ever.

In a profile for New York Magazine earlier this summer, Kerry Howley details how the language used to describe Serena’s game focuses on her strength, never grace or intellect: ‘One sensed in early accounts of the Williams sisters’ dominance, and senses even now, a certain tightening of the available vocabulary in describing a muscular black woman on the court.’

These are not compliments, she writes, especially when Williams’s womanhood is constantly questioned. J.K. Rowling swiftly shut down a Twitter user who said the 21-time Grand Slam winner was ‘built like a man’. A New York Times article was devoted to the tennis champion’s physique and why the other woman on the tour didn’t want it. Then there was Shamil Tarpische, head of Russia’s Tennis Federation, who called both she and her sister Venus, ‘the Williams brothers’.

Anyone who writes about her must include her expletive filled rant at a linesperson in 2009 after a questionable call. In 2011, after another argument with a chair umpire, the Guardian’s Kevin Mitchell wrote that she’d ‘not only tarnished her own legacy, she held her sport in contempt’.

‘You see [Andy] Roddick, you see [John] McEnroe, you see [Jimmy] Connors… You see all these players go absolutely ape and people move on with them,’ tennis champion and WTA founder Billie Jean King says in the 2012 documentary Venus and Serena. ‘They don’t want to seem [sic] to move on with Serena.’

McEnroe’s antics weren’t tolerated or beloved either. He built up his own notorious reputation. Like Williams, he is one of the best of his cohort. People love him. But their experiences are not comparable and if Kyrgios is the next McEnroe (probably a premature comparison but one that was made in the days immediately following the controversy in Montreal), his experience won’t be the same either.

Trash talk, as many players have pointed out, is not common in tennis, the way it is in other sports. And though so many players smash rackets, curse and pout on the sidelines, there’s an expectation of ‘class’ that makes Kyrgios a convenient target for vitriol, which can carry with it racist and xenophobic undertones.

‘The notable difference between black excellence and white excellence is white excellence is achieved without having to battle racism,’ Claudia Rankine writes in her powerful essay for New York Times Magazine on the cultural importance of Serena and her career. Williams’s wins are hers yet they resonate with so many people she’ll never meet. People who, perhaps, have had to balance ambition with respectability, knowing their missteps and most shameful behaviour would be magnified and used to justify their outsider status.

When Olympian Dawn Fraser admonished an earlier display of poor sportsmanship by saying both he and fellow Australian Bernard Tomic should ‘go back to where their fathers or their parents came from’, she reinforced the idea that not only did Kyrgios not belong in tennis, he didn’t quite fit in Australia either.

As the world’s best begin their campaigns for the US Open in New York, they bring with them all of the drama and expectations of 2015. No matter how promising or talented, how contrite he may be, Kyrgios’s outburst will not easily be forgiven or forgotten.