women and the role of symbolism in turkey’s current crisis 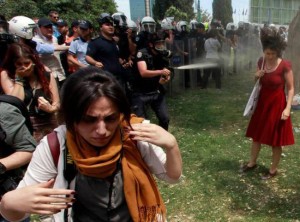 I first heard about the protests in Turkey when I came across a picture on the Facebook page, The Real Art of Protest (TRAP). The photo showed a woman being hit in the chest by a great jet of tear gas at such force that her arms were slayed backwards. She looks a bit like an angel. Or a martyr. The image was so violent but also poignantly beautiful that it led me to find out more about what’s going on in Istanbul, and what role women are playing in the unfolding turmoil.

It all started when a group of people started gathering, Occupy Wall Street style, in Gezi Park, Taskim Square in Istanbul, protesting against the demolition of the park to make way for a shopping mall. Though this protest was peaceful, the authorities began to retaliate with disproportionate violence, using water cannons, tear gas and pepper spray on protesters, at one point setting fire to protesters’ tents in the park.

Two people have been killed and many severely injured. These reactions by the police have caused the scope of the protests to broaden from the mere preservation of a city park to an anti-government uprising of citizens unhappy with the current conservative government. As a protester argued, ‘it’s not only about the park here, it’s about everything else in the past 10 years. People are angry, very angry’.

Much of the protest has turned to Prime Minister of Turkey, Tayyip Erdogan, who has been in power for just over a decade, during which time various conservative reforms have been made, such as limitations on the purchase of alcohol. Many protesters have claimed that although Turkey is a democracy, Erdogan is not acting like a democratic Prime Minister, increasingly forcing his conservative Islamist agenda onto the nation.

An example of Erdogan’s agenda, and a reason many women are joining the protests, is his conservative stance on women’s rights. Erdogan has previously advised Turkish women to each have at least three children. So don’t even get him started on abortion laws. Erdogan’s agenda largely supports a return to traditional, pious roles for women, which does not sit well with the growing secular population.

It is not surprising then that women have become a major part of the iconography of the protests worldwide. Images such as the one I saw on Facebook and the now famous woman-in-the-red-dress picture have become symbolic, according to protester, Esra, ‘that photo encapsulates the essence of this protest’. Images of peaceful protesters being targeted by police in full riot gear and tear gas speak more than words. The government is increasingly encroaching on public space, controlling personal life and not listening to the voices of the people even though it is a democracy.

It is worth questioning whether the use of images of women being violently targeted by riot squads as the icons of the movement is a positive thing. The image of the woman-in-the-red-dress shows her dressed in a feminine red summer dress with a handbag, her long hair being buffeted by the tear gas spray. It is an image of passivity, which has historically been linked to femininity in a detrimental way.

However, in the context of these protests passivity is a powerful resistance, because the protesters, regardless of gender, were peacefully voicing their views only to be aggressively targeted by the state for their actions.

Thus, the representing of the Turkish populous as feminine is arguably a positive thing. Images like the woman-in-the-red-dress are symbolic of an unequal and brutal battle that mobilise citizens to join the resistance both on the ground and online.