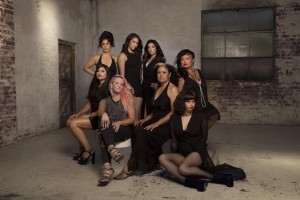 To coincide with International Women’s Day, Melbourne collective Women of Soul have released ‘Women Got Soul’, their first single available for purchase on the group’s Bandcamp page. During the month of March, all funds from the sale of the single will go to the Domestic Violence Resource Center Victoria, an invaluable organisation that will benefit greatly from the fundraiser. We spoke to Women of Soul members Christina Perfection and Chelsea Wilson to get all the details!

Who are the Women of Soul?

CW: Women of Soul is collective of female soul vocalists who have collaborated on live shows for nearly five years. Throughout the series vocalists such as Clairy Browne, Alphamama (Sydney), Randa Khamis (Perth) and Talei Wolfgramm have shared the stage to present original soul in venues across the city. To celebrate five years of live shows eight of Melbourne’s Women of Soul vocalists have teamed up to produce a special album including Kylie Auldist, Rita Satch, Candice Monique, Chelsea Wilson, Christina Perfection (The Perfections), Lisa Faithfull (Soul Safari) and May Johnston (Deep Street Soul). Rather than just releasing a mere compilation each vocalist has produced a brand new exclusive recording for this release. An all-star band featuring members of Cookin’ on 3 Burners, The Putbacks and The Bamboos play on each song making this the biggest collaborative project in the history of Melbourne Soul.

How did Women Got Soul come about?

The series is curated by Chelsea Wilson (PBS 106.7FM Music Manager/Vocalist) who had the idea to put together a soul revue style show that celebrated female soul vocalists.

How did you come to be paired with the DVRCV and what will the money raised go towards?

CP: We wanted to use International Women’s Day as an opportunity to start supporting women in a really tangible way. We looked at a range of ways we could do it and decided on DVRC. It’s local, supports people who are experiencing violence, regardless of age or gender and also provides resources for practitioners who want to further their skills to support survivors of violence. It’s really heavily focused on inclusion and empowerment.

Amongst the many relevant issues, what will be at the forefront of your mind on International Women’s Day?

The continuum of violence and discrimination and how in 2015 it is still such a major factor in the lives of women. We’ve come such a long way but there is still so much to do to promote respect and equality for women. Sexism and misogyny is entrenched in our culture. But things are slowly moving forward. One thing we are very excited about for International Women’s Day is the renewed energy in the feminist movement and new and powerful voices speaking out about the barriers women face. Women across diverse cultures and faiths are actively challenging patriarchal and sexist paradigms. We are slowly reaching new levels of awareness and respect for gender diverse communities. IWD is a reminder to maintain the effort!!

What else can our readers do to support this fundraiser?

We would love it if people spread the word about our fundraiser via social media! We want to raise as much money for DVRCV as possible and celebrate IWD!

You can purchase the single by following this link. You can find out more about Women of Soul and the DVRCV here and here.