You Are Here – here again! 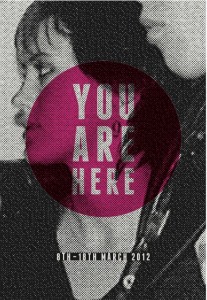 Last year, the You Are Here Festival held in Canberra was a bit of an unexpected success – funded in part by the Centenary of Canberra and Canberra CBD Ltd, the festival showcases independent art, theatre, music and other great projects and activities in Canberra through a series of free events held in the city centre over ten days.

Utilising reclaimed spaces and public areas for the events, You Are Here aims to bring the CBD to life, and show Canberrans the vibrancy and culture that exists in the Capital. This year, the festival is taking place from the 8th to the 18th of March.

Being from Canberra myself, and a bit of a fan of independent arts, I was always looking forward to You Are Here when it was starting out in 2011. I just didn’t expect quite so many other people to be as keen as I was.

Chatting to me in their cramped but cute office, YAH Producer, David Finnigan (Director of 2011’s festival), and Directors Yolande Norris and Adam Hadley have to agree.

“It’s such a fucking mystery as to where all the people came from last year,” David said. “Some of it had to be that they were just walking past SmithDicks [the festival hub] where it was all on.”

But there had to be something to keep people coming back for more, and my personal theory is that the festival had such a ‘come one, come all’ atmosphere, and provided such a range of events over the ten days, that people were keen to find out what could happen next. For a start, despite the fact that YAH draws on a lot of pre-existing Canberra projects or activities, most locals have no real idea of what goes on in their city, and having it all in one place is beyond convenient – it’s magical.

This year again, the Directors have tried to keep that Canberra focus going, by encouraging locals to come chat to them about their ideas, and handing the curatorial reigns over to other local organizations where it made sense to. (In fact, Lip will be participating in an event on the 8th of March, but more on that later).

“It wasn’t ‘write an application form with your ideas’, it was ‘come and chat to us’ – and a lot of people just came and introduced themselves to us, and told us ‘this is who we are and what we do’,” Hadley explained.

David felt that, compared to last year where the festival was constrained by time and relied a lot on his own personal networks, this year’s YAH is a lot more focussed on what makes Canberra tick.

“Yolande and Hadley have curated a festival that I think is more responsive to what is actually going on here,” he explained. “There are a lot of groups I didn’t know about and they have their own following and groundswell happening. I’m genuinely excited about it.”

A quick glance at the festival program suggests that there’s actually a ton of things to get genuinely excited about, not least of which are the four major events taking place on the weekend nights of the festival.

They kick off with the ‘broke-down cabaret’ performance, Horseface Ethel and Her Marvellous Pigs in Satin, happening in The Newsroom on March 8th. On Sunday the 11th, an all-day laneway festival called The Beach will take place in Tocumwal Lane in Civic, and is presented as a day-long beach party, replete with gelato and surf-rock, beach towels and even a fashion parade.

B-Ball Band Bash is an unusual band competition, where four local bands battle it out on the basketball court, to determine who plays first and last in what is really a mini-music festival, taking place on the 17th.

And finally on the 16th, So You Think You Can Hipster is an outdoor dance party in Petrie Plaza, with a string of local DJ’s presenting their best selections for the crowd’s dancing pleasure.

The name, ‘So You Think You Can Hipster’ seems to be a slight jab at the critics of last year’s festival, who argued that the events held a certain exclusivity that embraced a snobbish alternative culture to the detriment of average folk who may not identify with the avant garde.

According to David, that was far from the intention. “It’s not a jab! It’s a hug!” he exclaimed.

Hadley added, “It’s totally a tongue in cheek owning of the hipster tag and how freely it was given out last year. It’s to the people who labelled You Are Here hipster, and then the next thing they said was ‘Oh, I didn’t go to any of the events, they weren’t for me’. It’s like, well, you didn’t leave the house, so…”

And certainly, this seems to be a relatively fair point, considering the events decried those claims in practice by attracting a wide range of people from a cross section of the community – older folks, young professionals, indie kids, students, middle-aged parent-types – I witnessed them all at one event or another.

The point seems to be that people who enjoy independent art will enjoy the events. People who are generally disinterested in or aggravated by art, theatre, music and the like would probably not enjoy any event of that nature, be it held by a bunch of hipsters or not.

Another major criticism of the festival last year (and by ‘major’ I mean, I raised it in this article, when I interview David the last time), was that there was a disparity in the gender representation throughout the events.
Has that improved at all this time around?

“It’s still a mostly white festival, but it’s definitely got a better breakdown in terms of gender compared to last year,” David said.

Yolande thinks it might have something to do with the nature of the festival, and how people became involved with events. There was a certain level of spontaneity and boldness required from the artists performing or appearing at You Are Here, a quality Yolande thinks might be more regularly found in men than women.

“Across the board, I have noticed that so many more guys seem to be able to just boldly cold call or email and say ‘you’ve never met me, here’s what I do’, and it really bugs me to know that often I won’t get proposals from women artists, until they’ve met me and know me,” she explained.

Whether or not that’s the case, Hadley points out that at the end of the day, it’s about having as much good quality work in the festival as possible, regardless of the gender of the artist.

“At no point have I ever approached anyone saying ‘this event is too much of a sausage fest, we need some ladies in here’, that has always been a secondary thought. The first thought is, ‘I can trust this person to deliver a high quality piece of work’,” he said.

I can respect that logic, though the conundrum still baffles me in general (where are the creative ladies? I know they exist, but I see them so rarely…).

Although the representation might be less varied than hoped for, the range of events on offer is the exact opposite – from pub theatre, art exhibitions and gigs to readings, walking tours of Canberra and dance parties, You Are Here promises to be a vibrant feast for the senses.

Canberrans may be perturbed by where all this art and creativity came from, but the whole point of the festival is that it was here all along.

And as Hadley puts it, if you build it, they will come.

The You Are Here official program will be launched on Thursday the 23rd of Feb, at Smiths Bookstore, Canberra. For more info, check out their website.