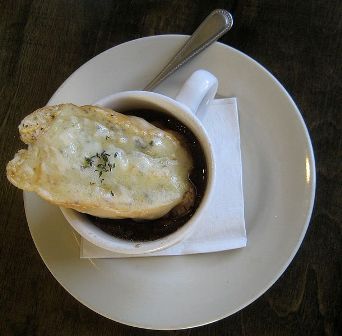 French Onion Soup is one of those recipes that manage to make the most basic, taken-for-granted ingredient and make it taste exquisite (also, funny trivia, in France, French Onion Soup is apparently just called Onion Soup). I suppose it’s easy to make anything taste good if you caramelise it in butter, but it’s still pretty impressive. It’s also fantastic for when you are on a budget and don’t want to live on mi goreng.

But it’s not without its drawbacks. Forgive me, I’m about to descend into what may seem like cheap, teenager style toilet humour but is actually intended to invoke caution.

One evening I found myself staring at my barren, pre-pay day cupboard and found, due to having good pantry staples and a herb garden, that I had the ingredients for French Onion Soup. One of my housemates had never had this dish and was intrigued. I assured him he’d love it and sure enough, an hour later he helped himself to three bowls of the stuff.

‘It’s amazing how you can get healthy food to taste like decadent, naughty food.’ (I didn’t have the heart to tell him it was full of butter).

The next morning I wandered into the kitchen to make myself a cup of coffee and found my housemate on the couch. Nonplussed, I woke him and asked, ‘Why are you on the couch? You have a bed!’

He glared at me for a second and then asked, ‘Is it safe to go into my room?’

To which he responded, ‘Emma, I will never forgive you for not warning about the side effects of that soup. I was farting so much in my sleep that I woke myself up. It was so putrid I had to evacuate to the lounge.’

Sure enough, when I opened his bedroom door it was like colliding with a brick wall. It took a full day of having all the doors and windows open to purify his bedroom.

The moral of the story is this: definitely cook and eat this soup, but only in the company of people with an immature sense of humour who love you no matter what.

Heat the butter in a large pot until completely melted but not sizzling. Add the onions and cook for approximately half an hour, over medium heat, stirring regularly so they don’t stick to the bottom of the pan.

Add the beef stock and bring to the boil. Add the sage and then reduce to a simmer. Leave for 30 minutes. Season to taste.

If you like, serve with toasted baguette topped with melted gruyere cheese.