a yummy substitute for maccas: lamb tagine with lemon and olives 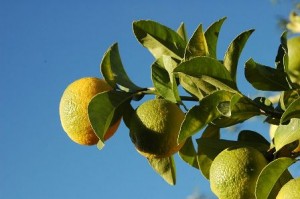 Last weekend I visited my soon to be in laws with my fiancé. Despite his parents being uncommonly lovely, low-maintenance people, I was a little nervous. The reason for our visit was to help them build a house out on their vineyard. We piled into the car, our ridiculous little Pomeranian, my partner and myself and drove out to Orange into a land filled with fields and fields of grapes, as well as steers, alpacas… and sheep.

Having never built a house before I was feeling a little useless as I watched men expertly assemble the roof (I think with things called trusses). I was keeping half an eye on my dog thinking the worst thing that could happen would be for him to fall down a rabbit hole, given he is tiny.

Next thing I knew, my fiancé’s father, a mild-mannered man, was yelling my dog’s name at the top of his lungs. I’m thinking ‘Oh my God, has he bitten someone? Has he picked a fight with a bull?’ No, it was neither of those things. He had, in fact, run into a neighbour’s paddock and started expertly rounding up dozens of disgruntled sheep (I imagine they were disgruntled as I would be if I was being bossed around by a dog that is 90% fur).

My partner and I jumped into a buggy and put pedal to the metal to go after him. The sheep disappeared behind some bushes and didn’t re-emerge for a day. I was mortified. Not only was I not bringing anything to the table in terms of helping build a home for my new family, but my dog had completely disgraced himself and very nearly made an enemy of the neighbours.

I did what I do in any and all situations where I feel like I’m falling short – I offered to make dinner. I noticed a tagine in the kitchen, a lemon tree in the garden and some preserved olives in the pantry. I knew then that I could salvage the situation.

That night I prepared a tagine with the ingredients mentioned above and I managed to leave town without wanting to explode with embarrassment. The moral of the story is this: learn to cook – it’ll save your skin in the weirdest of situations.

Heat a splash of oil in a large tagine. Once hot, add the onion and garlic and cook for five minutes until softened and fragrant but not coloured. Add all the spices and the chilli and cook for one minute, stirring constantly. Add the lamb and stir so the lamb is well coated.

Add the stock and bring to the boil. Place the lid over the tagine and let simmer for one hour. Add the tomatoes, potatoes, chickpeas, lemon and olives and simmer, covered, for a further 30 minutes.

Sprinkle over with the fresh coriander and mint and enjoy. 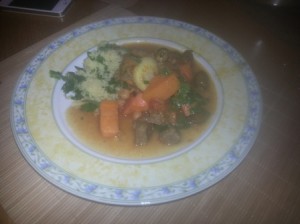