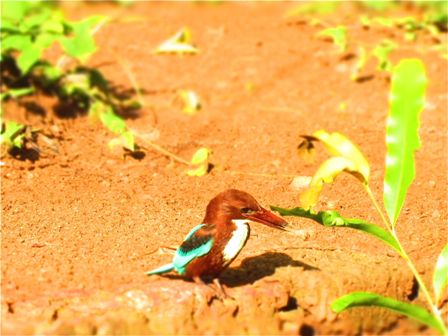 You don’t need to Google it: it’s a kingfisher

Yesterday, I sat and watched a kingfisher on the banks of a creek. When I first spotted the chocolate brown and blue bird, I didn’t know what it was. I wondered whether it was a kingfisher, and instinctively leapt up to check the Internet. But I couldn’t, because there is no Internet where I am.

Instead, I sat with the bird a while longer and when someone walked by I asked, ‘Is this a kingfisher?’ The passerby said, ‘Yes. It’s going to bathe.’ On queue the kingfisher duck-dived into the creek and then flew into a tree. Once in the tree, it cleaned itself merrily, ruffling its feathers into a fluff.

I am at an Ayurvedic health centre in Kerala, India. It is perched on a lake and my cabin is surrounded by a beautifully manicured tropical garden. Spectacular to look at, it is also the source of the Ayurvedic medicines used in the treatments.

It’s the low season in India, so I am sharing this tropical paradise with only one other guest – a social worker from Germany. On my first night here we talked about her smartphone, which had broken.

‘I don’t know how I’m going to live without the Internet. No Facebook!’ After pausing for a moment, she sighed. ‘I guess it will be good for me to go turkey for a while.’

I agreed it would be good for me to “go turkey” from the Internet for a while too. I added coffee to the list of things I needed to go turkey from. She added chocolate.

A few weeks ago I read an article about how using smart phones was affecting our capacity for empathy. I would link to the article here, but I don’t have the Internet. If I recall correctly, it asserted that because we interact more with our screens and less with people face-to-face, it is weakening the part of the brain that controls empathy. In a way, our empathy muscles are atrophying through lack of use.

If there were a scale to measure someone’s human engagement skills (there probably is, somewhere on the Internet) I would probably measure fairly highly. Yet I still find small talk with strangers, networking events and making telephone calls torturous. At parties, I use my smartphone as way to disconnect briefly from social interaction in the way people used to go outside for a cigarette. I busy myself with Twitter in the way I once might have busied myself admiring the artwork on someone’s walls. It has become a crutch for me, a little cubby of social isolation I can hide in when I want to. I can imagine the temptation must be even stronger for those who find most social interaction truly difficult and tiresome. However comfortable, I can see that I am losing opportunities to connect with humans face-to-face. The more often I retreat the harder connecting becomes.

I’ve known for a while I needed to cut back on Internet usage. Unfortunately, disciplined use of technology is not a skill that comes naturally to me. When I try to limit my own access to the Internet, I develop elaborate excuses to break my own rules…like a true addict.

But, here there is no Internet, so discipline isn’t the issue. Going turkey has been much easier than expected. I don’t miss Twitter at all and those moments when I simply must use the Internet to research something have disappeared.

In just a few days without the Internet to hand, I have asked more questions of real humans (the answers, by the way, have been far more sensible than anything I’ve read on Yahoo!Answers). I have read books instead of scanning blogs. When a light bulb has lit up in my head, instead of searching Google for similar ideas, I have picked up a pen and paper and sketched it out.

I still have technology – my laptop, mobile phone without Internet, and a kindle –so I’ve hardly become Amish. And yet, my days feel so much more spacious and relaxed.

I will have the Internet on steady flow again before long. No doubt I will go back to using it a lot…too much. But I will remember to leave my phone in my bag at parties, and force myself to stare at the artwork on the walls instead of at Twitter. I might even leave my phone at home from time to time. Who knows: without the Internet getting in the way, I might just learn something.