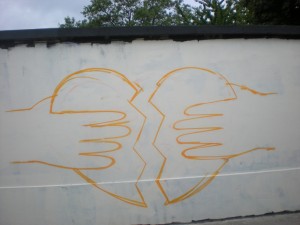 This was not the first time my father had expressed an opinion which had bothered me, but for some reason this particular incident has stayed in my mind over the last few months.

I was watching the phenomenal 2011 film by Iranian director Asghar Farhadi titled A Separation, which follows the lives of two startlingly different families. There is the middle class family in the midst of a messy divorce, while the other family who represent the conservative working class is seeking revenge for a tragic accident.

The opening scene shows the couple Simin and Nader in a courtroom while they argue over the custody of their only child. It is at this point that Simin is asked by the judge why she wishes to leave her husband. The judge asks her if Nader is an addict or is abusive towards her, which Simin denies, she then praises Nader as being a decent man. The judge is then left perplexed by the situation; he is at a loss as to why a woman would leave her husband if he is not a terrible human being.

At this point my father shook his head and called Simin a ‘stupid woman’. Now, while I’m not someone who rushes to the defense of women out of personal bias, I couldn’t help feeling offended by his statement. My father’s remarks really bothered me so I asked him why he felt that way, considering the film had only begun and he was unaware of the couple’s situation.

He laughed and replied ‘I’m just saying if there’s nothing wrong with the man, then why the hell is she leaving him?’

I understand how some males resent the legal system, claiming that it favours women and is often responsible for good fathers being denied access to their children. I’m not writing today to discuss the ethical issues of child custody disputes; I am however interested to know why some women are expected to stick it out with their husbands even if they are deeply unhappy. (As this discussion focuses mainly on my experiences of Middle Eastern culture, I will be focusing on the issues I have come to know with heterosexual couples; same-sex couples are not common in this culture.)

It is often preferable for families to be together; if a husband and wife can work out their differences and still have mutual respect for one another, then raising children in that environment may be the wisest thing to do. But imagine a scenario where a mother is a married to a decent, hardworking, non-abusive man… and for one reason or another she has fallen out of love with him. As a society, should we insist that this woman stay in this marriage despite her unhappiness, in order to keep the family unit together and to simply keep the peace? Is it really only acceptable for a woman to leave the marriage if she has been hurt or cheated in some way?

There are probably a great deal of marriages in the world that began with two people who were not passionately in love, but decided that they would rather be with someone whose presence they didn’t mind rather than remain alone. This is often the case in Middle Eastern countries where families wish to keep marriages between people who share the same religion, culture and identity. In a remote village there may not be many options for the youth and therefore from a certain age they are aware that they will marry someone within their social circle. While they may not have a romantic love story, they see their marriage as one that is stable and will keep them from becoming social outcasts, as unmarried individuals in most Muslim countries are not looked upon fondly.

We tend to not cast judgment on how people fall in love, but we expect them to be able to deal with whatever challenge is thrown at them and to withstand the temptation to simply walk away from the marriage. At least this is the case within the culture that I was raised in. As a female Muslim, born and raised in Australia, I tend to have one foot in the liberal feminist world and one in the conservative world of my family and community. My mother’s thoughts on the matter are: ‘You should never throw away a perfectly good marriage simply because you’ve fallen out of love. Most people lose the passion they once had for their partner within a few years, this is very normal.’ She believes that as long as there is still trust and respect between the two, everything else is unimportant and mostly stems from individuals becoming selfish.

My mother’s words seem like the norm in most Middle Eastern cultures. A couple may be young, and passionately in love, but one day perhaps a decade later those feelings will have vanished. In this particular case, if the woman is unhappy with her marriage and wishes to leave, this would prove to be difficult as her culture would clash with this desire, leaving her to become resentful.

I believe that we all have the right to be happy with our lives, and we should not have to be in a terrifying situation within our marriages in order to have the approval of those around us to leave. The concept of happiness being regarded as selfishness is truly heartbreaking.

If you are a mother and have been deprived of happiness then there is a good chance your behaviour will display the feelings that you are trying to bottle up inside. You may become curt with those around you and ultimately it is your children, the ones who you wish to protect who become witnesses to your sadness.

I’m sure there are mothers who would rather stay in miserable marriages than ever contemplate splitting up their families; they will stay until their children grow up or perhaps they will simply never leave. While I could certainly never sacrifice my personal happiness like that, I would never begrudge those women. However, I would expect the same courteous and non-judgmental behaviour from those very same women, if I chose to leave an unpleasant marriage. If I chose happiness over convention.

If you have decided that your marriage is over, then you should have the freedom to leave the situation and give yourself a new start. People should not be judging you to be a failure as a wife or mother, but instead see you as a brave individual who is willing to go through an unpleasant scenario, in order to benefit not only you but your children who will be raised in a more positive atmosphere. While your husband may find your true feelings to be a shock and hurtful, I’ve always believed that a hurtful truth is far superior to a sweet lie.

I understand the concept of falling out of love is a foreign one for my father; it is simply incomprehensible to him in the same way that Middle Eastern culture is often lost on me. My father’s opinion makes more sense to me once I’ve understood how he and countless other men were raised within their culture. They were raised knowing that they would be the bread-winner of the house and that it was necessary to always have financial, mental and physical stability in order to have a wife and a family of their own. So in my father’s mind, if your husband has a good job, is not physically/mentally abusive towards you, then honestly you shouldn’t be complaining. He and many others they believe that they are doing everything right; they were taught to work hard and so they do. So I suppose that a woman’s ability to simply fall out of love can be somewhat infuriating for them.

My father’s opinion of Simin’s choices in A Separation is just that – an opinion. He is free to have one and to be able to express it. While I personally do not agree with his views about women, my father is unlikely to ever be persuaded to change his mind, so we’ll just have to agree to disagree.