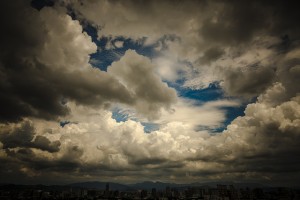 For the longest time, I’d believed it to be a mere fatigue masked as sorrow, bouts of mourning meant to induce involuntary sympathy.

My mother is an exceptionally engaged person. It’s impossible to slot her into a schedule because she’s constantly days ahead of herself. Compulsion to productivity, she calls it.

Cases where she does happen to be idle, however infrequent, thus jar me deeply – seeing her hands having stilled in the sink while doing the dishes, eyes clouded over and body subtly withdrawn into herself, as if in pain. When I ask her what is wrong she replies:

The Han. There’s quite a lot of it today.

So you just feel off, you mean, is what I say. Fine. Take a nap. Do you have a headache?

My mother just smiles wistfully at me, shakes her head bemusedly and returns to her work.

Here is how it begins: my mother wakes up one sunny morning and is instantly at war with the world, having somehow adopted the reproachful misconception that fate is leading her down a dark path. I am reminded of a Jenny Holzer truism: “Some days you wake up and immediately start to worry. Nothing in particular is wrong; it’s just the suspicion that forces are aligning quietly and there will be trouble.”

The Han sometimes remains for days, lingering in marrow and calcifying away in the lungs. A carcinoma. I become exasperated, fed up with this psychological trench warfare of obscurities and the nebulous, our battalions nothing more than vague, unsatisfying answers we uncompromisingly wield at each other. On days like these, everything slows to a dragging crawl, sluggishly inching along. The most inconsequential things can send my mother into a fit reminiscent of that of a disgruntled teenager. I am left perturbed in the gunsmoke- hazy aftermath. My initial concern dissipates into a stubborn refusal to understand, to empathise. Then, just as I teeter on the precipice of exploding, of capitulating, it is gone as quickly as it came. The smoke clears and I can see my mother’s face, the elegant slope of her nose and the high, proud arch of her brows. We achieve détente.

It took me a while to realise that Han does not simply imply being under the weather.

We have a framed quote hung in our house, archaic “Old Korean” calligraphy blotting the yellowed page. A colloquialism: “A Woman Feeling Han Freezes the Ground Even in Spring.” Walking by that quote stirs in me the retroactive impatience I have for Han and all it has come to influence in my life. When faced with the matter it seems ridiculous that my mother’s weakness has managed to penetrate into the very walls of our home. As a young girl I felt aggrieved, personally wronged somehow. Why couldn’t we just hang a benign little painting of a beach, or a Monet haystack? Why did everything have to be so – so depressing, some deep fraught issue?

I find it shameful to say that I waited until my junior year in high school to find out.

First off, one cannot understand Han unless they comprehend Korean history. The invasions, the comfort women, the militant psyche – all punctuated by turbulent, constantly fluctuating hands of power. History books are chaptered by numbered Republics, each distinct by its manner of autocratic or democratic rule. Many of them are concluded with a collapse or overthrowing of some sort.

Until recently, I’d viewed Han with a “Pandora’s Box” mentality – a repository of emotion, something to open up and sift through on a rainy day.

How wrong I was: Han is not at all a temporary flux in state of being, but rather a constancy in one’s cultural psyche, a profoundly suffocating mixture of sorrow and regret. In its monosyllabic solemnity it carries the burden of an entire country’s suffering. Its origins are said to stem from Korea’s oppression-imbued history, the collective feeling of unresolved bitterness that ran rampant amongst citizens of the peninsula in times of frequent invasions by imperialistic foreign powers. It conventionally denotes an emotion so inbred, some go as far as to say it is imprinted in our DNA itself – genetically heritable from our ancestors, a bone-deep longing that surpasses any individual blockade.

(Although Han may anchor my mother’s soul, my father has seemingly rendered himself impenetrable to its symptoms. He dismisses the idea as sentimental nonsense, a figment of our imagination. “We can’t keep living in the past,” is what he would say, a spidery finger flicking impatiently at a smouldering cigarette. His fixed position being in front of the computer, he will sit there as proud as a guard soldier at his post, the cold blue gleam of the desktop screen flashing in the lenses of his glasses. )

The prospect of Han is a unique one, truly unifying in that this unnamable emotion not only impresses itself upon a nation’s populace, but spans to even farthest reaches of the globe where Koreans reside – some who may not have even the slightest idea of their homeland’s tragic history. This is paradoxical; many define Han as being expressed implicitly through aspects of Korean life and culture. How, then, do others argue the presence of such bitterness in even those who have been many times removed, over generations, distanced not only physically but culturally?

Others have ventured as far as to believe that Han is a genetic illness. What some doctors have even gone as far as to diagnose as a tangible, acute physical pain, many will experience and may never realise the cause of it, just how personalised the affliction really is.

(Symptoms of Han may include dyspnea, heart palpitation, and dizziness. The doctor’s diagnosis – does my blood sing with the sorrow of the unavenged?)

There are many facets that encapsulate the face of the Han “syndrome”, the major one an underlying, spiteful urge to avenge all historic wrongdoing in the name of nationalism. In the face of persecution, however, a passive acceptance and willful endurance fuse to yield a faint impression of hope. And therein lies the exclusively untranslatable nature of Han, the reason why its equivalent cannot be disclosed in any other tongue – its absolute range of human emotion, from fury to grief to passivity to faith – spurred by the resentment and anguish characteristic of a nation kept so long in isolation.

When my mother now pauses in her work to lift her eyes and stare at nothing, I know she is seeing a world tinged shades darker by the ubiquitous shadow of a phantom cloud that will always haunt her. As generations pass, the cloud will continually gather weight, but never quite spill over.