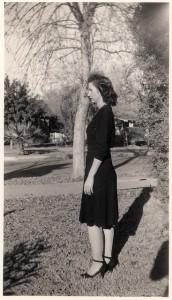 Sometimes I wonder if my grandmother really existed or if I made her up in my head. All I have are constructed and reconstructed memories of a mythical woman and her illness and the inter-generational impact of her life.

My grandmother’s photographs hang in my mother’s bedroom. Ten photographs of different sizes; some in colour, some in black and white. Smiling coyly at the camera in a gorgeous white fur coat, all ringlets and dimples. In another, clasping her hands together on a white couch, lit up like a ghost on her wedding day to my Opa. My favourite is her smiling broadly with her sister, my Opa and his friend. The four of them look as if they had been dancing all night. If the photograph was in colour I am sure their cheeks would have been flushed pink. When I go to find the light in my parents’ room – and this is whenever I make the trip up North to visit them – I do a little test. I fumble for the light switch in the dark, and if my hand brushes the hanging frames it means my grandmother loves me and is watching down over me. I brush my hands on the photographs in the dark every time, not always accidentally.

During the Easter holidays I attended a family reunion and met some of her last remaining siblings: men and women in their old age, forgetting who I was and yet when I asked about her they told me we looked alike.

Her younger sister, a tiny and softly spoken woman, was there, her hair thinning from wearing a veil in the convent since her late teens. I explained politely my desire to hear everything about my grandmother who died 25 years ago. My great aunt told me there wasn’t much to say, as when she was growing up my grandmother was away studying. She did remember particular memories: going to the pictures and my grandmother coming home and being able to play the songs from the soundtrack. They had forgotten – or didn’t mention in their early stages of dementia – she had been a piano prodigy and studied at the London College of Music. My mother’s insistence that I play piano resonates with me now. I’m taken back to my childhood, fingers aching and my frustration at having to practise when all I wanted to do was climb trees outside with my brother.

Another great aunt – my grandmother’s youngest sister – died of a brain tumour at the age of 19. I will never know whether my grandmother was already affected by symptoms or if her younger sister Kathleen’s death was a trigger, but her schizophrenia began to manifest. Once the dux of her school and a teacher, she became delusional and catatonic at times. One day she disappeared. I’ve seen the paper clippings, yellowed and brittle. A woman walking in a ghostly white nightgown haunts my thoughts. I’m not sure if it’s real but I see it now: hair in ringlets, pale face like mine, walking in a long white gown through traffic. Did someone help her? She was found six weeks later working in a pub on the other side of Melbourne, unaware she had six young children and a husband in Box Hill. She had amnesia. My mother, the third-eldest forgotten child.

I don’t know much about her life after that, other than the snippets my mother reveals to me when she’s feeling nostalgic. When I was a teenager and acting up my mum would remind me of my grandmother’s illness. My mother can recount the times my grandmother scared her friends out of the house by screaming and chasing them. Memories of my mother’s embarrassment and shame. Memories of my mother watching her own mother talk to the devil outside the window. An absent mother and a neglected child. My mother blames her own lack of domestic skills on her mother, and I in turn blame it on her. I wouldn’t want for my own children to not know how to cook.

My grandmother was in and out of the Kew Cottages psychiatric hospital throughout the 1960s and 1970s. I’m told she had electroconvulsive therapy. I wonder if she was scared or if she even knew what was going on. Whether it helped or made her worse I’ll never know. My mythical maternal grandmother died several months after I was born, 25 years ago from Steven Johnson Syndrome. My mother thinks it was an allergic reaction to her hair dye.

I think about my grandmother often. I’m reminded she was a real person, with her own agency, life perspectives and thoughts. However, the details are sketchy. She is my mythical, maternal grandmother.