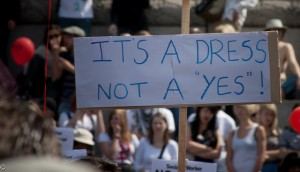 How do I paint this picture, in ink strokes that become words, of how all three of my closest friends were separately raped before any of them turned twenty? Not one of their attackers was ever brought to justice. It serves as little wonder then, why I — as the only one amongst them who hasn’t been violated in such a way — see the crime as an inevitable act I am merely soon to experience.

I envisage myself in the future as a victim, without being a victim yet. Every whistle or unwelcome stare I encounter becomes a confirmation of a reality I’ve dreamt up inside my head. Most of my nightmares involve ‘no consent’. The fact of my body makes me want to curl up like a worm in a darkened corner beneath the soil where no one can see or touch me. I would much rather be a shadow or a fleeting exhale of breath, than a solid sentient being, capable of being possessed by a body uninvited.

Why does every hand that grazes my skin conjure visions of terror?  I’m not the one whose flesh was used as a vessel to store some man’s insolence and misplaced bravado. And yet, every male advance that is made towards me isn’t just met with a polite decline; it’s met with an apology and an excuse.

I am almost compelled to ask forgiveness for not handing over my limbs for the sake of someone else’s satisfaction. But my apologies are just pleas and pathetic bargaining in disguise. More like—

Why do I live in a society where I feel the need to justify my control over my own body?

My three closest friends have never met each other, and yet they share the same broken sadness. The aftertaste lingers in my atmosphere like secondhand smoke. I am untrusting and afraid.

I leave the house with a rape alarm clipped to my bag, my senses always alert. I lower my head when the cashier says hi to me. I don’t grin back at the friendly stranger across the street. It’s a little sad, I admit. A few people laugh and call it paranoid and unnecessary, but I have little reason to believe otherwise. Honestly, I can never quite fully decide whether I’m being realistic or cynical. I know that the male population is not solely comprised of depraved sexual predators. And yet, every compliment I receive seems like a prelude to something more horrible. A man smiles and says I have pretty eyes, and I instantly feel the need to run.

This not the way for a young woman to live. It is a fact that there are men that are kind and caring. I just can’t shake this uneasiness, can’t stand the thought of my friends being violated, don’t want to imagine someone’s body forced unwillingly against mine. No one deserves that. No one. No one.

But yesterday as I walked to the bus stop — holding my jacket tightly around me, as I often do, as if it were some sort of armour — I was struck by a simultaneously frightening and poignant thought. Being female means being a warrior. And I cannot continue to live weighed down by fear.

I have watched my friends fight through sleepless nights and feelings of shame, worthlessness and undue guilt. They have described themselves using words like ‘contaminated’ and ‘destroyed’. Nevertheless, within each of them, I see this persistent drive towards happiness. I have witnessed them gradually reclaim their identities and rebuild their self-esteem. Oh my dear darling friends, you are so tender. You are so beautiful. You trample these roads with smiles despite the trauma trapped between your bones. I will never stop being in awe of you. You aren’t just statistics of a crime, you’re statistics of strength. You’re part of the resolute army of women who gathered every shred of hope within themselves to move on from a violation beyond words. You warriors. You knights in shining fortitude.

Rape is not okay and it will never be okay. Despite this, my friends have not allowed their rapists to rob them of their dignity and lives, and I can’t let this deeply ingrained terror rob me of mine.

For now, I still walk with a rape alarm attached to my bag. I’m still hesitant to open the front door when I hear an unexpected knock, and I still dream of living in a community that fosters respect rather than dismissing female exploitation. My friends still have a long way to go in terms of recovery, and more so, society does too. But I do have hope. And I am now learning, ever so slowly, how to keep my heart from turning into a sword, fighting off all the love in the world.