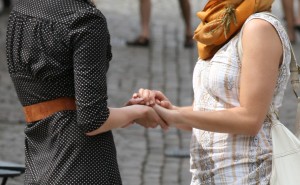 Thinking about it all, every last drop of it.

She kind of died in a way, without actually ceasing to exist.

Without a funeral. Without a kiss goodbye. Not a black dress in sight.

Instead, a slow, heart-breaking realisation she wasn’t who she once was and never would be again. Dead, at least to me.

My best friend sits somewhere now and it isn’t here as we always had thought it would be.

I am sure she still has her same kind heart, but it is faded and jaded and tucked underneath.

No baby bumps growing big together, no children to play hide and seek, no sitting on a veranda, silver haired and side by side as the sun sets.

No matter how hard I would beat my fists against it all, in defiance. No matter how much convincing, pleading with her she could be anything she wanted to be, if she would only try… if she could only try. Sleepless nights, tossing and turning waiting for the phone call to warn she had finally hurt herself beyond repair.

I had to make a choice, a hard one. Which meant I had to swing it all down with a thud and break the last piece of tendon, that had kept our fractured friendship together.

Walking ahead and not looking back, until I was in the clear. Consumed by guilt for not going back and carrying the broken, wounded bird behind me. To be someone breathing, while she lay crumpled, heaving. Thick, suffocating smoke from a fire I left smouldering.

We were best friends at a time in my life when I needed one. ‘Two peas in a pod,’ they would say, ‘like sisters,’ joined at the hip. She rescued me definitely, in so many ways. When it really mattered. In our 20s we were everything to each other. Long road trips up and down the Pacific, dancing and singing to music all night, birthday celebrations.

She had scooped me up time after time when the boy I thought I loved threw rocks at my heart.

You see, I was the wounded bird first.

I would lay in bed with her of a night as she would stop the tears and make me laugh until tears came again. We told each other everything the way all good cliché best friends do. Our hopes and our dreams, our fears and our doubts. Stopping me on my way out the door as she filled my ears with sparkly compliments, from head to toe. Her way of giving me a suit of armour; to build me up so I could face the day when I needed a push, and to deflect the rocks being thrown from the boy down the road. We spent every minute of every day we could together. Time in the sunshine, excited to grab life by both hands and shake it upside down.

There were early signs for sure, but they were more like quirks I told myself and I shrugged them away as quickly as they came.

When the psychotic break first happened, she was like a small child again. Scared and broken, forever changed right before my eyes. Almost like a magician had appeared and poof, the person she had been for 26 years was gone. The one in her place was a heavily medicated one – to dull down all that was happening in her brain, unfortunately it dulled it all down, every cell.

I sometimes close my eyes and imagine what life would be like if she had still stayed as she was. If she didn’t have demons passed down from mother to daughter. If her head didn’t grow heavy from all the schizophrenically grey thoughts consumed. If she didn’t seek some kind of peace in denial, through drug addiction. If she still had her long, wavy black hair and her loud booming laugh. She loved to laugh before she had no choice but to cry.

If only I could have drawn an outline of her then, before the addiction blurred her, with a magic marker.

I still reach out to clasp at ghosts, to hear her voice. The big stuff she has missed out on; and the million tiny insignificant things. I long to sit with a bottle of wine on the floor of her boho rental and talk about everything and nothing for hours on end.

But I know now it is not her who shows up anymore, it is someone else – an intense stranger with painful emptiness behind those eyes.

The worst part is I know deep down she realises it too.

That little feeling you get like you have forgotten to do something or you need to be filled up by something… a piece of your tummy is missing, that is her, and I ache for that piece.

I think I always will. I guess that’s what happens though when someone you love dies.

She didn’t mean to make the splash created.

She didn’t mean to get me wet when she stepped off the ledge and fell in.

Every last drop of it, sadly severing what was.

So missed though, every day.

First published on Till She Sings.

2 thoughts on “memoir: she”