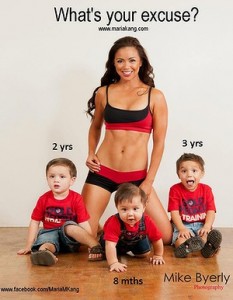 No one is happy with postnatal body shaming fitness mummy-blogger, Maria Kang.

Mother of three and fitness blogger, Maria Kang, angered a bunch of people pretty much everyone when she posted a picture of herself on Facebook, posing amongst her children (clearly labelled aged three years, two years and eight months) looking totally ripped, with the caption ‘What’s your excuse?’ Kind of implying that if you don’t have the postnatal body of a lithe 12-year-old body builder, you’re a lazy, will-powerless slob. The post was viewed 16 million times and the overwhelming tone of the comments was negative, with many commenters rejecting Kang as arrogant, hurtful and even a bully. What do you think?

In what’s turning out to be a big month for women authors, Eleanor Catton has won the Man Booker Prize for her recently released novel, The Luminaries.  Catton’s novel, set in 19th Century New Zealand, is the longest book to ever win the prize (it’s a whopping tome of 848 pages). Not only is Catton the youngest winner of the prize, at 28, but she is also the first New Zealander to take home the title. Sounds like another addition to my post-uni-summer-reading-list…

While we’re on ‘Feminist Firsts’: GQ Australia features its first ‘plus size’ model.

Australian model, Robyn Lawley will be the first plus-size model to grace the pages of men’s magazine GQ Australia. For a medium that is widely renowned by us angry femos for objectifying and homogenising women’s bodies, pedalling a pornified, unrealistic barbie-doll femininity, GQ are being fairly cool about the whole thing, with editor Ceri David claiming that ‘we didn’t feature Robyn because she’s larger than your typical model, we featured her because she’s beautiful, and she has a very relaxed, laid back energy to her, which made her the perfect fit for our Feelgood Issue.’

This Tel Aviv judge clearly doesn’t understand what rape is.

Judge Nissim Yeshaya has stepped down after claiming that some girls actually enjoy rape. The judge made this comment in an appeals committee hearing on the rape of a teenage girl, who was fortunately absent at the time the remark was made. Not cool, bro.

Gloria Steinem weighs in on the whole Miley Cyrus thing.

Feminist heavy-weight/national treasure/original gangster, Gloria Steinem has given her two cents about Miley Cyrus, seeing as everyone else is (is Germaine? Has anyone heard anything?) Steinem was asked whether she thought that Cyrus was setting the whole feminist movement back, to which she replied ‘I wish we didn’t have to be nude to be noticed. But given the game as it exists, women make decisions… I think that we need to change the culture, not blame the people that are playing the only game that exists.’

Now for your evening Lol: This rich, Serbian bachelor wants to impress you! Yes, You!

Single? This wealthy, middle-aged, Serbian bachelor, Don Milisav Juan Gonzales Brzi, wants to put a ring on it. It being you. Well, as long as you’re aged 16-20. (I’m old news, so ladies, you’ve got less competition, jus sayin). Peruse these 27 pictures of Don’s lavish home and fall in love with his wonderful personality.

What’s been on your news radar today? Anything interesting we’ve missed? Share it with us in the comments!