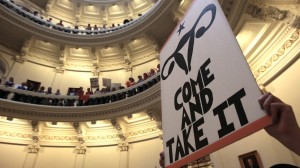 Despite Wendy Davis’ 11-hour filibuster blocking a super restrictive anti-abortion law in Texas, the law passed in July, banning abortions after 20 weeks and requiring doctors to perform abortions at special facilities. But the good news is that this week a judge ruled that the new regulations are unconstitutional, violating doctors’ rights and unreasonably restricting women’s access to reproductive choice.

For the second time in two years, MPs in Tasmania’s Upper House have rejected a bill that would legalise same-sex marriage. After yesterday’s vote, the Upper House has out-ruled the legalization of gay marriage in Tasmania, voting to leave the debate to federal politics. In a bid to ensure Tasmania learns from its awkwardly homophobic tendencies of the past (being the last state to decriminalize homosexuality in 1997) the Greens have vowed that they will reintroduce the bill later in the year.

In his recently published book, fashion designer Karl Lagerfeld provocatively stated that ‘no one wants to see curvy women on the catwalk.’ Lagerfeld reiterated this statement earlier this month, claiming that the French healthcare system is struggling because ‘it’s the fat women sitting in front of televisions with their pack of crisps who say slim models are hideous.’ In response to this statement a French association that advocates for the rights of curvy women, called ‘Pretty, Curvy, Sexy and Fine With It,’ has filed a legal complaint against Lagerfeld for his ‘defamatory and discriminatory comments.’ Because French women don’t mess around.

*Trigger Warning.
Combining my two biggest fears, a 13-year-old Pakistani girl dug herself out of a grave after being raped and buried alive. Two men abducted the girl when she was on her way to Koran lessons, although her father reported the abduction to police, they failed to act. The girl was brutally raped by the men who, believing she had died during the attack, buried her. But in a shocking demonstration of strength, the girl was able to dig herself out and catch the attention of passers-by who helped her to a local hospital.

These total bros at this dumb law firm, Clifford Chance, in New York have clearly not seen the cinematic masterpiece that is Legally Blonde, because they recently sent out this memo instructing female staffers and lawyers to ‘tone down’ their ‘feminine quirks.’ Because ladies don’t make good lawyers obvs. The memo told women employees to ‘project power’ by not talking all girly by saying things like ‘um’ and ‘like,’ not dressing slutty but not dressing ‘like a mortician’ and definitely no giggling or ‘tilting your head.’ Female employees rightly denounced the memo as sexist, demeaning, patronizing and just all round the worst, stating that ‘we have never been a very female friendly firm, but this is beyond the pale.’

What has been on your news radar today? Anything interesting we’ve missed? Share it with us in the comments!