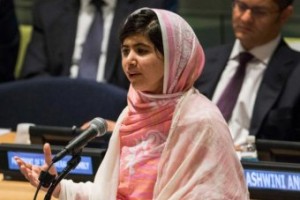 Malala Yousafzai, a school-girl who was shot in the head by the Taliban last year has addressed the United Nations on her 16th birthday. Yousafazi was targeted by the Taliban by demanding girls have access to education. She has vowed to carry on her fight and used her speech to call for universal education for young people.

After weeks of protest and a marathon filibuster by Senator Wendy Davis, legislation severely limiting access to abortion has passed into law in Texas. The move allows abortions only in surgical centres, requires doctors who perform them to have admitting privileges at nearby hospitals, dictates when abortion pills are taken and bans abortions after 20 weeks unless the woman’s life is in imminent danger. The cost of upgrading abortion clinics to surgical centres will close many clinics and create a backlog that could make women miss the 20-week deadline. (In a bizarre twist, tampons and sanitary napkins were confiscated from women entering the Texas Capitol before the vote.)

Kotex makes ‘crotch-sweat’ the new cause of anxiety in women

Feminine hygiene brand Kotex has invented a new thing for women to be worried about (crotch-sweat), and conveniently released a product that will save us from apparent mortification. A new ad campaign shows women exercising happily – only to be horrified when they notice sweat patches between their legs. Commentators have highlighted the fact that there is no such campaign targeting insecurity in men, and that sweat isn’t a major concern for women who are exercising.

Covered in Lip this week: