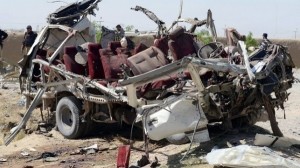 14 women students were killed in a terrorist attack in southwest Pakistan on the weekend. Militants blew up a bus carrying the students and bombed a hospital that was treating survivors. At least 25 people were killed in the two attacks.

According to CNN, militants held hundreds of patients, doctors, and nurses hostage in the hospital for several hours.

‘As casualties were being brought to the hospital terrorists had taken position inside the hospital building,’ he told reporters.

‘They opened fire on administration and police officials who arrived at the hospital. One suicide bomber blew himself up in the hospital.’

‘All the (bus) victims are women teachers and students,’ said Mir Zubair Mehmood, a police official in Quetta, in southwestern Pakistan. The blast shattered the windows of offices and classrooms of the university.

U.N. Secretary-General Ban Ki-moon condemned the attacks, saying ‘violence against women and educators has increased in recent years. The aim being to keep girls from attaining a basic right to education.’ Figures from UNESCO show that only 18% of Pakistani women have 10 or more years of schooling.

Women’s rights have long been a contentious and volatile issue in Pakistan. In an article in The Independent, Bina Shah writes that ‘if women are so respected in Pakistani and Muslim culture, why are they being targeted for execution by militants with claims to both? Former Prime Minister Benazir Bhutto was killed by the Pakistani Taliban in 2007. Prominent social worker Farida Afridi was murdered by extremists in July 2012. Malala Yousufzai was critically injured in October 2012 (and the Taliban have sworn to finish the job in the future).’

While no group has claimed responsibility for the attack, officials believe that a home-grown terror organisation was to blame.