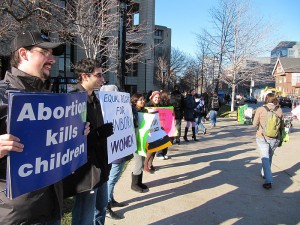 Controversial new ‘anti-protest’ laws have passed the Victorian lower house by one vote. The summary offences and sentencing amendment bill will now go to the upper house, the Legislative Council for approval.

If the laws are passed, police will be able to issue ‘move on directions’ ordering a protesting individual or group to leave an area or cease an action. The changes also see an increase in the fine for a breach of a move on order, currently totally $500.

The Victorian government has sought to quell concerns that the laws impede a citizen’s right to protest. Victorian Attorney General Robert Clark has said ‘Every Victorian has the right to protest and express their view. However, when individuals resort to unlawful tactics that threaten the livelihood of law-abiding business, employees and their families, they must be held to account.’

It is believed that Mr Clark’s comments refer to the recent protest on the East-West link road project in September last year. Work was halted temporarily due to the protests, which saw workers blockading the site and clashing with police.

Despite Mr Clark’s assurances to the contrary, many groups maintain that these new provision will in fact threaten the democratic right to protest. Fitzroy Legal Services solicitor Meghan Fitzgerald has criticised the proposed laws stating ‘If people believe they’re engaged in non-violent protest, they won’t be able to hold their ground against police.’

Other groups such as the Salvation Army are also concerned about the perhaps unforeseen implications such laws may have, particularly towards already vulnerable groups. In a statement the Salvation Army has said ‘These laws will disproportionately affect marginalised young people, people experiencing homelessness , poverty and mental health issues.’

Groups opposed to the new laws held a protest in Melbourne’s CBD on Tuesday, attracting numbers in their thousands.

If the bill passes the Legislative Council (as is currently predicted) the new laws will come into effect on 1 September this year.