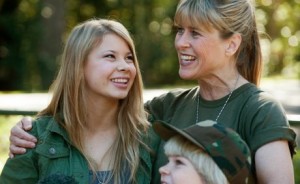 Image via The Chronicle/ Warren Lynam

Bindi Irwin has joined the birth control debate, saying she is upset that young girls in poor countries are having children they simply cannot feed.

The daughter of the late Steve Iriwn turns 15 today. In an interview with News Corp, Ms Irwin said she wanted to use her time in the media spotlight to talk about serious issues – ones that people ‘tend to push aside and don’t focus on’.

‘Girls as young as me or even younger are having kids and that doesn’t seem right to me,’ she said.

‘I think that’s really sad and we certainly need to start putting our heads together and thinking of ways to solve this.

‘So educating our kids, giving them that freedom of choice and available help.’

Irwin advocated for safe and consistent access to birth control for vulnerable women who live below the poverty line.

‘There’s such a thing as seven-year-implants, so if you had a girl that was 11 years old and gave her the seven-year implant she wouldn’t be able to have kids until she was 18.’

According to the UNFPA, at least 500 million women around the world want to use family planning methods but are unsuccessful because of a lack of access, information, and/or family and community support.

Irwin has previously spoken out about issues important to her. In 2011 she launched Dick Smith’s book Population Crisis, and is well-known for her television show (in which she taught listeners about the importance of animal and habitat conservation).

Her desire to change the world has, in part, been attributed to the premature death of her father in 2006. At the time, Bindi was just eight years old.

‘So I think seizing the opportunity and making the most of your time is very important and loving life. Don’t spend your life angry or upset. Enjoy it because you don’t have long.’

Do you think it’s a good idea for people to use their celebrity status in order to talk about reproductive health and other issues?

What do you think will help the problem of overpopulation?