in brief: burlesque dancer must give up performing to keep children 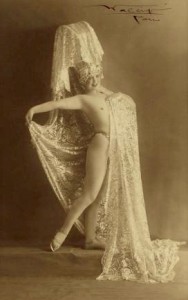 According to reports received by online burlesque group 21st Century Burlesque, a female dancer has been banned from performing if she wants to maintain custody of her children.

The website received the information about a young woman known as ‘Ida Claire’, who allegedly has been banned from burlesque dancing by a judge in Alabama.

Ms Claire appears to be involved in a custody battle with the child’s father, where her history as a burlesque was raised in question to her character.

21st Century Burlesque found that the actions are not particularly surprising, stating on their website ‘… it highlights the fact that burlesque is an art form that is still not widely understood or accepted.’

Further information regarding this matter is not available as yet.

One thought on “in brief: burlesque dancer must give up performing to keep children”