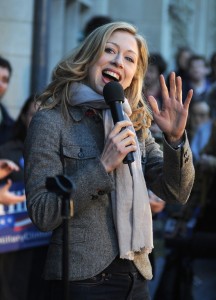 Last week, at an event in New York, Chelsea Clinton announced that she and husband Marc Mezvinsky ‘have our first child arriving later this year.’ The world immediately reacted, asking ‘But what does it mean for 2016?’ Mainly via Twitter – ‘news of the pregnancy spread rapidly throughout the political twitter-verse.’

Vanity Fair has concocted up a list of the worst reactions of the pregnancy announcement, including one by USA Today in which the writer stated ‘It’s unclear how Chelsea’s pregnancy will affect Hillary Clinton, who is considering a race for president in 2016.’ Many people took to Twitter and shouted ‘that you wouldn’t say that about a man.’

It’s not surprising that people have lashed out a bit against that statement, as it’s always a bit strange when news writers speculate that only female politicians will be affected emotionally and career-wise when it comes to girly things such as babies, pregnancies and the like. It’s almost as if some writers were trying to make a controversy out of nothing at all, speculating what role the baby will play in a hypothetical, possible, run for the 2016 US Presidency.

Both Hillary and Bill are thrilled and will be affected positively because of Chelsea’s pregnancy. After all, they did both take to Twitter themselves, tweeting that they were ‘so happy’ and ‘thrilled’ for Chelsea and Marc, respectively, and that they were both excited about their ‘new titles’ as grandparents.

Politico writer Alexander Burns explained that this pregnancy ‘will be something else entirely: the most prominent American politician ever to become a grandmother. As far as sympathetic roles go, it doesn’t get much better than that.’ Others are saying that this is ‘a magical prop baby – spun out of thin air just in time to gin up sympathy for Clinton, who currently sports a 49 per cent favorable rating.’

Whether or not you think any of this hype and speculation is worth your time or not, it’s definitely interesting to consider that stories such as these are only propagated because Clinton is a female politician, who may favour with the American public because she’s a grandmother. However, I really do hope that the American people look beyond that, if she does decide to run for presidency, because there really is much more to Hillary than her expecting grandchild – she is herself a powerhouse.