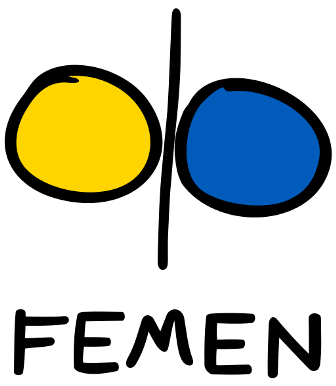 FEMEN activists went topless to protest against the anti-abortion movement in Madrid on Sunday.

Abortion is currently a legally authorised practice in Spain. For women who wish for an abortion within 14 weeks of pregnancy, or 22 weeks for those facing health risks, abortion is a legal option. But the new Minister of Justice, Alberto Ruiz-Gallardon, disapproves of the procedure to terminate life.

In July 2012, on reforming the abortion legislation, he said:

‘It seems to me to be ethically inconceivable we have lived so long with this legislation, and I think that the same level of protection that is given to an unborn child without any type of handicap or deformity should be given to those that are verified as lacking some of the abilities that other unborn children have’.

And so the anti-abortion demonstration was held in the streets of Madrid with the support of the Minister of Justice. Five uninvited FEMEN activists disrupted the event by appearing bare-breasted and yelling ‘abortion is sacred’ at the crowd of demonstrators. Some protesters wrote it on their breasts, too, and some others wrote “Keep out of my body” as an expression of their protest.

One of the participants of the demonstration, Jose Luis Roman, 43, said, ‘We consider abortion to be murder. We want zero abortions.’

The conservative and religious people of Spain have always opposed abortion, regardless of the time of pregnancy. The current conservative government of Spain’s ruling party PP is known to have sustained the Catholic Church’s moral and social standards and always opposed the ethic of abortion.

In the past, the Spanish Workers’ Socialist Party (PSOE) has been on the side of “pro-choice” women that wanted freedom to judge, by their own wisdom and knowledge, whether or not they should require abortion. In 2010, the then socialist government passed the abortion legislation. It was permitted within 22 weeks of pregnancy: within 14 weeks of pregnancy to be practiced purely with the mother’s demand or within 22 weeks if the pregnancy is jeopardising the mother’s life. However, as the PP won the general election in November 2011, things changed.

The PP became the ruling party the government and its Minister of Justice Ruiz-Gallardon stands firm on abolishing the abortion law, siding with the anti-abortion campaign.

The FEMEN women’s topless protest ended with the women being detained by the Police.  Their protest received much attention and roused much emotion on the Ruiz-Gallardon’s ruling concerning abortion. A male steward, who was watching the protest as he was partaking in the demonstration said: ‘It was a deplorable spectacle. I had to hold back children since they were running to see what was happening’.

FEMEN is a female protest group based in Paris. It was founded in 2008, and involves female protestors who protest, topless, against sexual discrimination and crimes against women. The members take pride in their topless riots. The news of their topless protest can also be found on their official website. In a post on their website they wrote about the demonstration: ‘If they do not respect our bodies and our decisions, we will not respect their books, their temples or Holy walks’. They concluded the much emotional story in capital letters: ‘GET OUT OF MY VAGINA! MY PUSSY, MY RULES!’