in brief: joe hockey has no new ideas for addressing gender imbalance in business 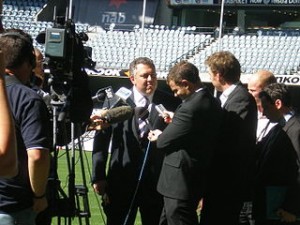 Six months out from the federal election, shadow treasurer, Joe Hockey, refuses to be drawn on the Coalition’s policy stance regarding women in executive positions.

Addressing an audience of 350 women at the Executive Women of Australia’s inaugural leadership symposium, Joe Hockey expressed his support for mentoring programs as a way of redressing the gender imbalance at the board level of Australia’s largest companies.

Writing online for Women’s Agenda, Angela Priestly points out that the ASX 200 has a 15.7% rate of female board members. For the rest of the companies on the ASX, however, less than 10% of director and executive positions are held by women.

Many Australian companies have well-established mentoring programs and although they provide important support to those women looking to advance their careers, critics argue that on their own they have done little to significantly change entrenched attitudes and practices.

Priestly sees Hockey’s statement as a cop-out. She said: ‘Joe Hockey can tell corporate men all he wants that they should be “mentors” but they’re not necessarily going to listen, and even if they did, are corporate women really willing to see mentoring as their one and only means for getting ahead?’

Sydney Morning Herald business writer, Elizabeth Knight, argues that ‘[the argument for mentoring] has been around for 30 years and statistics around female management participation have barely budged.’ She claims that despite some progress, the female management movement ‘seem to be traversing the same old ground. Lots of committees and meetings, endless studies and some high-profile advocates but minimal results.’

The Shadow Treasurer stopped short of outlining his party’s policy position, but flatly rejected the need for quotas to achieve greater female representation on the boards of Australian companies.

Last year the government launched the Boardlinks program to increase female representation on government boards, a figure that currently sits at approximately 39%, however, it has not released any policies aimed directly at improving the situation in private companies.