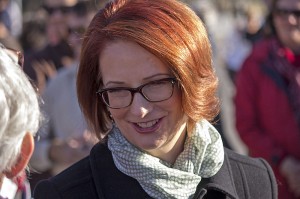 Former Prime Minister Julia Gillard has been named chair of the Global Partnership for Education. Made up of nearly 60 developing countries, donor governments, international organisations and civil society groups, the program aims to have the world’s poorest children attending school.

Ms Gillard, at the head of all this, will take control of fundraising efforts to raise money for over 50 million children to be educated worldwide.

‘I am delighted to take on this new role with the Global Partnership for Education,’ she said in a statement.

Having served as education minister before becoming Prime Minister in 2010, Ms Gillard believes that one of our highest priorities is education.

‘I believe that with 57 million of the world’s children still lacking access to basic education and 250 million children unable to read, write or master simple math, there can be no higher priority.’

The program’s website states that it has ‘mobilised more than 3.6 billion dollars to improve access and quality of education.’ Global Partnerships has helped 22 million children go to school for the first time by building 50,000 classrooms and training over 300,000 teachers.