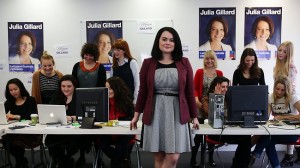 The Women for Gillard campaign will be launched on Tuesday as Prime Minister Julia Gillard attempts to reach out to female voters.

The independent campaign arm is funded by the Labor party and is modelled on US President Obama’s highly successful Women for Obama operation. According to the Herald Sun, Women for Gillard will seek ‘micro-donations’ from supporters’ credit cards to fund digital, print, and television ads.

It is believed that Ms Gillard will reference her infamous ‘misogyny’ speech when launching the campaign. Public perceptions of Tony Abbott as being ‘anti-women’ will also be played upon.

Former Gillard government staffer, Clarabella Burley, heads the outfit. She highlighted Mr Abbott’s position on abortion as an example of a misogynistic stance.

‘I don’t know any young woman who is not disturbed by Tony Abbott’s record on women, describing abortion as the easy way out.’ said Burley.

Feminist historian Anne Summers has pointed out that Ms Gillard is the subject of continuous sexist attacks online. ‘There is an incredible amount of lewd, pornographic images circulating of Julia Gillard designed to undermine her authority in the job,’ Ms Summers said. ‘There’s pictures of her head grafted on to a naked woman saying, ‘I still won’t vote Labor’.’

However, national political editor for the Daily Telegraph, Samantha Madden, has claimed that the Prime Minister has left it too late to play the gender card.

Madden suggests that the campaign is full of contradiction, saying: ‘if voters are supposed to back Gillard simply because she is a woman, why is the Prime Minister not backing a female candidate for the Victorian seat of Batman?’.

The Women for Gillard campaign may be ‘preaching to the choir’ in its efforts to make Gillard appear as the ‘female-friendly’ candidate. Switched-on female voters already know how they feel about Abbott and the ALP’s policies towards women and see Gillard as an alternative to that. But seeing a candidate as the lesser of two evils is hardly the motivation to support them financially.