in brief: lorde calls out photoshopped image, reminds us that ‘flaws are ok’ 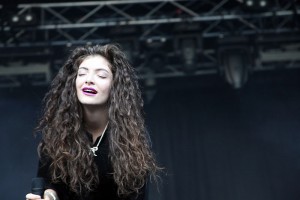 Indie/hipster teen pop sensation, Lorde has impressed the masses yet again with her profound feminist sentiments.

After seeing a photoshopped image of herself surface online, the New Zealand starlet took to social media with a *GASP* un-retouched image from that very performance at Lollapalooza in Santiago, Chile, thereby calling out the frequent photoshopping of women and girls in the public eye.

Lorde uploaded an image with visible ache and skin blemishes, you know, like normal people (not dolls) have sometimes? She captioned the photo comparison: ‘I find this curious – two photos from today, one edited so my skin is perfect and one real. Remember flaws are OK :-).’

This comes after the singer recently Instagrammed a selfie, showing herself wearing no make up and covered in ‘zit cream.’ Clearly, Lorde is hoping to send a body positive message to her fans.

Many have already made the point that Lorde’s pop-feminist actions are particularly important given that the 17 year old singer’s global teenage fan base is somewhat starved for ‘attainable’ role models. While Lorde is ‘besties’ with fellow pop starlet, Taylor Swift, she has not shied away from criticising the likes of Selena Gomez and (the infamous) Miley Cyrus for their apparent lack of feminist credentials/poor role modelling for young girls.

While Lorde’s message is nothing new to a cynical and seasoned feminist like me, the core message that ‘flaws are OK’ is definitely one that young women and girls don’t hear often enough.