in brief: more women and children seeking asylum in australia 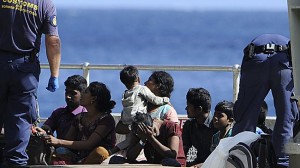 New figures suggest that the proportion of families travelling to Australia by boat to seek asylum is increasing. The news comes as the federal government seeks to alleviate pressure on the overcrowded detention system by granting bridging visas to families.

According to The Australian, approximately 40% of new asylum seekers are now coming as part of family groups. The report refers to an Immigration Department briefing note that warns the number of families risking the perilous boat journey to Australia has increased.

Paris Aristotle, a member of the Government’s expert panel on asylum seekers, has blamed the increase on the parliament’s failure to compromise on a clear and effective strategy to address the issue. He claims that ‘two things are clear: smugglers will continue to exploit the impasse and many more people will die as a consequence.’

Federal immigration minister, Brendan O’Connor, announced a raft of measures on Wednesday, aimed at combating the pressure on Australia’s detention facilities. The measures include making families seeking asylum eligible for bridging visas. These visas will allow families into the community, but will deny them the right to work and will grant them only minimal financial assistance, equal to approximately 80% of the Newstart Allowance.

Families will only be eligible for these visas after a period of mandatory detention at centres like Curtin in Western Australia and Wickham Point in Darwin, during which time they will undergo security and health checks. Officials have promised that women, children, and families will be incarcerated ‘for the shortest time possible’. Most inmates are expected to be detained for around four months.

Both Curtin and Wickham Point detention centres are being modified to provide a separate area to detain unaccompanied children and families. The Curtin detention facility was opened by the Howard government in 1999, but was closed just three years later after a number of serious incidences including cases of self-harm amongst inmates, and a mass escape.

With only six months left until the election, the government is looking to reduce the public cost of incarcerating asylum seekers. According to the opposition immigration spokesperson, Scott Morrison, if current expenditure continues, the budget for asylum seekers will increase by approximately $5 billion dollars in the next five years.