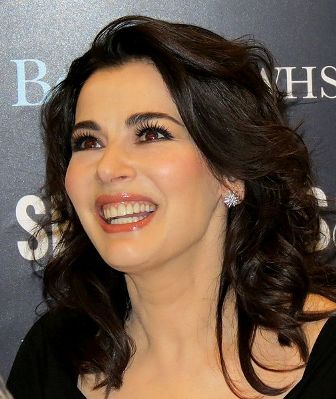 Disturbing images of Saatchi gripping Lawson by the neck and flicking her nose at London restaurant Scott’s were circulated on Sunday in British tabloid the Daily Mirror’s weekend rag.

Restaurant goers watched on in disbelief during the incident but failed to intervene, with several onlookers willingly describing the scene to Sunday People.

‘She had a real look of fear on her face,’ one person present told the paper.

‘No man should do that to a woman.’

Staff at Scott’s further failed to step in or eject Saatchi from the premises, and declined to comment on the matter to the British press due to their policy on patrons’ privacy.

The alleged abuseprompts questions on what is acceptable conduct for bystanders and whether violence against women is a societal voyeur rather than outrage.

These questions and public condemnation of Saatchi have been ongoing in the Twittersphere, with further arguments debating the media’s use of the word “row” as opposed to the term “domestic violence” or “abuse” under the hashtag #Nigella.

The reporting of these images further harks back to the ongoing debates surrounding the ethical duties of journalists, photojournalists and documentarians where subjects are in danger, the most prolific case being the death of Diana Spencer, Princess of Wales.

Police have begun an investigation into the incidents depicted in theMirror’s photographs, but no charges have been laid by Lawson.

Lawson and Saatchi have declined to comment on the photographs to the media and have been reported to have left their London home separately with suitcases.

Charles Saatchi has issued a statement in which he claims that the photographs are of nothing more than a ‘playful tiff’.

‘There was no grip, it was a playful tiff,’ he said.

‘The pictures are horrific but give a far more drastic and violent impression of what took place. Nigella’s tears were because we both hate arguing, not because she had been hurt.

‘We had made up by the time we were home. The paparazzi were congregated outside our house after the story broke yesterday morning, so I told Nigella to take the kids off till the dust settled.’

Saatchi has been cautioned for assault after he spent five hours being questioned at Charing Cross Police Station.