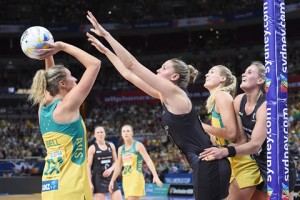 The Netball World Cup is well underway with a shock defeat to the Australian Diamonds at the hands of old rivals the New Zealand Silver Ferns with a final score of 52-47.

The defeat is hot on the heels of the Diamonds blitzing their match against Barbados with a record-breaking 83 goals to 16.

In an interview for the official website of Netball Australia, Captain Laura Geitz claimed the loss was a ‘reality check’ but assured us that there was ‘plenty more netball to play’.

The match, still in the Preliminary Round, was billed as a grudge match following the 2011 World Cup Gold Medal final won by the Diamonds with mere seconds left on the clock.

With a backdrop of such tension, the match was a major attraction.

Held at the Allphones Arena in Sydney, it drew in an impressive crowd of more than 16, 000 netball fans.

Out of the 16 nations competing, many see the Netball World Cup as a two-horse race between Australia and New Zealand.

The victory puts New Zealand at the top of their pool with six points, ahead of Australia on four, Trinidad & Tobago on two and Barbados on nil.

As the hosts, Australia are determined to win.

But with New Zealand going into the finals ahead at the top of the tables, the stakes are ever increasing.

And we may yet see some surprises from both England and Jamaica who have the potential shake things up.

But despite the dominance of the major players, the World Cup is a chance to support international women’s sports and to open up opportunities for women in developing nations to compete on a global stage.

Following the popularity of the Women’s FIFA World Cup, the future of women’s professional sports is promising.

The final will be played on Saturday, August 16.