in brief: obama speaks out about rape and sexual assault on college campuses 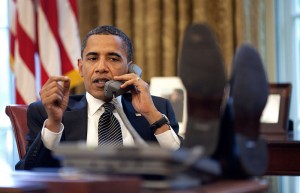 Last week, the Obama administration released a report and launched a new initiative to combat, and hopefully end rape and sexual assault on college campuses in the US.

The President has requested that those schools that receive federal funding are held accountable for accurate reporting.

Obama said, “’sexual assault is an affront to our basic decency and humanity’, also stating ‘real men are outraged by sexual violence.’

Vice President Biden also voiced his support of the movement by talking about what everyone can do, including men, to combat gender-based violence. Biden also addressed victim blaming, echoing the message of ‘teaching men not to rape.’

Obama reiterated his support of victims and survivors of sexual violence, saying, ‘You are not alone. We have your back. I’ve got your back.’

US feminist website Feministing has shown their support for the new initiative, echoing the sentiments of many college students in America, stating that Obama’s plan isn’t ‘perfect’, but that ‘presidential commitment is also a big step.’

For now, it’s fantastic that anti-rape and anti-violence activists are gaining prominence and getting recognition for their work to end assault on campuses. It will be interesting to see what Obama and his administration will do next to help them.

One thought on “in brief: obama speaks out about rape and sexual assault on college campuses”