in brief: Quentin Bryce speaks of marriage equality and republic 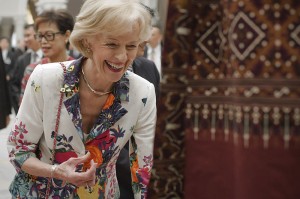 Governor General Quentin Bryce has caused public discussion to be re-ignited over several hotly debated topics, following a speech delivered as part of the ABC Boyer Lecture series in Sydney over the weekend.

In the key quote of Bryce’s speech, the Governor General called for an Australia ‘where people are free to love and marry who they choose and where perhaps, my friends, one day, one young boy or girl may grow up to be our nation’s first Head of State.’

In that sentence alone, the Governor General indicates her support for both equal marriage rights as well as an Australian Republic.

Bryce is the first Governor General to publicly confirm her support for an Australian Republic, in this landmark speech which encouraged greater respect and care for all Australians.

As a result of what will surely be a memorable speech for the Governor General, who will retire in March, opinion has been divided as a consequence of her vocalising her opinion. Prime Minister Tony Abbott, a staunch monarchist who opposes marriage equality, has seen no problem with Bryce’s comments, whilst they are clearly not in keeping with his own beliefs. Leader of the Greens, Christine Milne congratulated Bryce ‘for strong advocacy of marriage equality, a republic and an ethic of care. Real leadership.’

Conversely, Australian Republican Movement chair Geoff Gallop has taken Bryce’s speech as an indication that the time was once again right for an Australian Republic to be re-discussed in the public forum. ‘The governor-general has served with distinction as the Queen’s representative, but imagine what a powerful message it would send about this great country that we all love if we had a head of state who represented the Australian people,’ Gallop stated. ‘We will always be friends with Britain, but now we should be equals… We need an unambiguous, independent national identity that reflects and celebrates our freedom, our unity, our values of the fair go and our place in the world.’

Interestingly, comparatively little has been made of Bryce’s comments of her support for same sex marriage rights. The Australian Marriage Equality director Rodney Croome released a statement praising Bryce’s comments:

‘The governor-general’s dignified support for marriage equality will be welcomed by the many millions of Australians who support the reform…In particular, it will send a message to older Australians that this is a reform they can embrace because it strengthens relationships, family and marriage.’