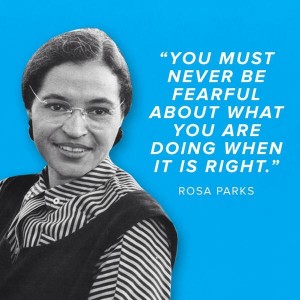 Perhaps some Americans had a bit too much turkey and stuffing last week, or maybe the Republican Party just needs to hire an intern to check spelling and grammar mistakes on social media. Nonetheless, Sunday proved to be an interesting day on Twitter with the GOP tweeting a photo of Rosa Parks with the tagline ‘Today we remember Rosa Parks’ bold stand and her role in ending racism.’

Later, the GOP re-tweeted that the previous post should have read ‘Today we remember Rosa Parks’ bold stand and her role in fighting to end racism.’ However, it was too late to stop twitter fans from jumping on the bandwagon. User @FeministaJones started the hash tag ‘#RacismEndedWhen,’ which prompted a slog of interesting and hilarious comments such as ‘#RacismEndedWhen Justin Timberlake wore braids’ and ‘#RacismEndedWhen the iphone was available in both black and white.’

Whether it was a mistake or not, it’s still no excuse for posting something that could have so many negative meanings for so many people. Luckily for the GOP, the onlaught of tweets was fairly mild considering what they could have said about the GOP’s lack of equality and inherent racism within the party.