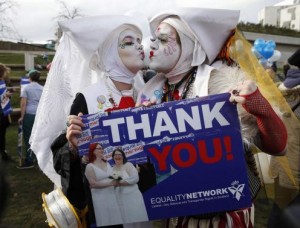 The first Scottish same-sex weddings can now take place in October, after the vote passed parliament 105 to 18. The parliament also voted down several attempts to amend the bill to protect the rights/interests of religious celebrants who opposed the law.

Scottish health secretary, Alex Neil, stated that ‘we have always maintained at the heart of this issue there is one simple fact: a marriage is about love. All couples in Scotland in a loving relationship must know that they have the same rights and responsibilities and, regardless of their gender, the same opportunity to get married.’

Tom French, policy coordinator for the gay rights group, the Equality Network, highlighted the significance of the ruling for the Scottish LGBTIQ community: ‘This is a profoundly emotional moment for many people who grew up in a country where being gay was still a criminal offence until 1980. Scotland can be proud that we now have one of the most progressive equal marriage bills in the world, and that we’ve sent out a strong message about the kind of country we are.’

However, what makes this event even more significant for the LGBTIQ community in Scotland is that not only was same-sex marriage legalised, but a historic law has been passed, ending ‘spousal veto,’ a horrid situation wherein trans* people had to obtain written consent/permission from their spouses before having their gender identity recognised by the state. While both England and Wales have legalised same-sex marriage, Scotland is the only nation in the UK to abolish spousal veto.

By the way… In the sky over Edinburgh today, just before the vote on the Civil Partnership Bill, there was a rainbow!

Seriously, how many more of these beautiful, beautiful stories are we going to have to hear before we get our act together, Australia ?!