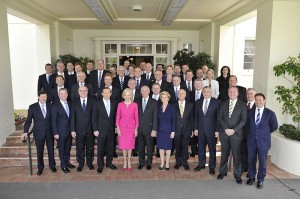 According to Broderick, women make up just one third of Australian parliamentarians, a statistic that needs to change if we are to see real action on women’s issues. Broderick states that ‘it’s important that women’s voices are heard at the highest level.’

Liberal back-bencher, Sharman Stone has been one among the many voices arguing that the Liberal party should introduce a quota system to ensure a more representative number of women in the parliament, as women only consist of 30 per cent of Liberal MPs. However, the Liberal party has been long opposed to the Labor quota system, priding itself on candidates being put forth for preselection on merit alone. The Labor party has long employed such quotas, but has not yet reached its goal of 40 per cent of MPs being women. Commissioner Broderick said that she would support any measure to boost the number of women in the Liberal party.

At an International Women’s Day breakfast earlier this week, Prime Minister (and, let’s not forget, the Minister for the Status of Women,) Tony Abbott, claimed that Australian women have ‘smashed just about every glass ceiling’, stating ‘it wasn’t so long ago as a Sydneysider that there was a female lord mayor, a female premier, a female prime minister, a female head of state in our governor general, a female monarch, obviously, and indeed the richest person in our country was female.’ However, according to Broderick, 93 per cent of Chief Executive Officer positions in Australian corporations are held by men. ‘Because we don’t see women at senior leadership levels in public life a lot, we can minimise their contribution,’ Broderick explained.

Broderick believes that major issues such as domestic violence, women’s working conditions and pay equality will be greatly impacted by low numbers of women in the cabinet. While Prime Minister Abbott is the Minister for the Status of Women, he is assisted by Michaelia Cash, who this week publicly claimed that she does not identify as a feminist. In a statement at the National Press Club, Cash said: ‘in terms of feminism, I’ve never been someone who really associates with that movement.’ She further added: ‘all I know is that I believe in women … but I also believe in men.’

Well, Elizabeth Broderick believes in men too, and has called on them to use their power to help achieve gender equality: ‘power in a country like Australia, in fact, any country in the world, largely sits in the hands of men. And if we want to make change, we need good, decent men taking the message of gender equality to other men.’