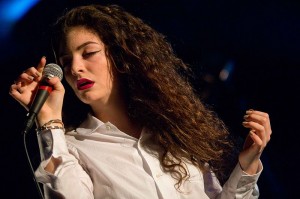 Since reaching global success with her debut album, Pure Heroin, 17-year-old Lorde is becoming a spotlight for media attention.

The pop star frequently discusses her views on feminism and over-sexualisation, and has recently been associated with ‘slut shaming,’ after comments she has made about other young starlets.

The critical responses to Lorde’s ideals can be traced back to her comments about Selena Gomez’s song, ‘Come and Get It.’ The singer described Gomez and her work as ‘pathetic’ and ‘anti-feminist,’ causing backlash from the public.

Last month 21-year-old, Gomez spoke to Flaunt Magazine about the comments, claiming that Lorde’s remarks had nothing to do with feminism at all.

‘That’s not feminism. Lorde is not supporting other women. That’s my honest opinion – that’s what I would say if I saw her.’

However, in a recent interview with V, Lorde denies any condemnation for sexualisation within the music industry.

‘People like to paint me in a certain way, but I’m a hugely sex-positive person and I have nothing against anyone getting naked,’ said that star. She claims to subscribe to feminist ideologies, and that getting naked simply ‘hasn’t felt necessary’ for her.

‘I just don’t think it really would complement my music in any way or help me tell a story any better. It’s not like I have a problem with dancing around in undies – I think you can use that stuff in a hugely powerful way.’