in brief: study finds australia has one of the most sexist job markets in the world 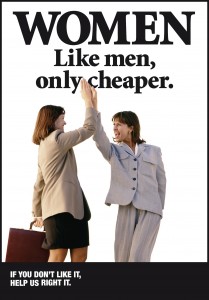 In new research, the Australian Council of Trade Unions (ACTU) has found that the Australian labour market is one of the most inequitable in the world when it comes to gender.

The institute says that Australian women are consistently underpaid and underpromoted in comparison to men, resulting in an 18% gap between the average male and female earnings. This equates to $1 million over a lifetime.

Although specific earnings differ by occupations and job sectors, ABS data shows that the average weekly earnings of full-time females is $165 less than that of full-time males – far from a situation of equality.

In 1969, Australia implemented its “equal pay for work of equal value legislation.” This was meant to reduce gender inequity in the workplace. But it seems that in 2013, we still have far to come.

According to the ACTU President, Ged Kearny, the gap can be partly attributed to gender hierarchies in occupations.

Kearny emphasised the trends that exist across industries where women do the majority of service line work while men take up most of the managerial positions. But this is only half the picture.

‘Even in the same occupation group with the same skill level, women still go home with less,’ she said. She noted that this evidence prevents anyone from saying that gender pay differences were entirely due to different jobs taken up by men and women.

The gender pay gap largely suggests that discrimination between men and women still exists in the workforce. Women are underpaid and undervalued in comparison to men. The situation is most inequitable in areas such as Business and Law where jobs are privately specified and pay is negotiable.

While most of Australia would agree that men and women should be treated equal, Kearny says that ‘Australian workplaces are stuck in a time warp.’ She says that this has resulted in women being treated unfairly and that this needs to change.

‘Australia is not a sexist country. We want the best outcomes for men and women equally and it’s time employers caught up with this ideal.’

One thought on “in brief: study finds australia has one of the most sexist job markets in the world”