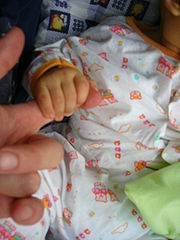 A study from the US has suggested labour-inducing drugs are linked to autism later in life.

But researchers have stressed that the link is not definitive; speeding up a birth does not in itself lead to the developmental disorder.

Dr Simon Gregory, of Duke University, and colleagues, report their findings in the journal JAMA Pediatrics.

‘We don’t know whether it’s maternal health, infant health or the induction/augmentation process itself which is resulting in this elevated risk,’ says Gregory.

The researchers say the higher risk linked to induction was similar to that seen in other known risk factors for autism, such as being an older mother or giving birth before 34 weeks.

The association was particularly pronounced in male children.

Further investigation is required to determine the nature of the correlation between labour-inducing drugs and autism.

‘The next step will be to drill down into the clinical detail associated with the mum and the infant to see if we can draw out this association,’ says Gregory.