in brief: Tasmania to decriminalise abortion 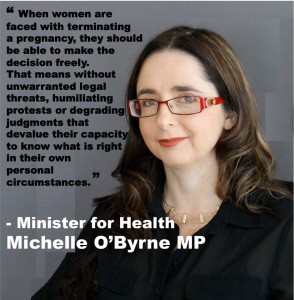 Image Via ‘Support The Decriminalisation of Abortion in Tasmania’ Facebook Page.

After months of campaigning and debates, Tasmania is set to become the third Australian state to decriminalise abortion.

The Reproductive Health (Access to Terminations) Bill 2013 has passed the Legislative Council, in amended form, after extensive late night debates. The bill passed this afternoon with nine votes in favour and five against.

The Reproductive Health Bill, introduced in April this year by state Labour health minister, Michelle O’Byrne, removes abortion from the criminal code, allowing women to seek terminations up to 16 weeks on demand and over 16 weeks with the permission of a doctor. Under this new law there will also be a ban on protesting within 150 metres of abortion clinics.

Prior to amendments made in the debate overnight, doctors were legally obligated to provide women seeking terminations with referrals to services, even if they personally object to abortions. However, this aspect of the bill was repealed after some conservative MLCs took issue with the harsh consequences for doctors who refused to refer patients to abortion services – a potential $32, 500 fine. Rosemary Armitage, who voted against the bill argued: ‘I think if you get pregnant you can Google abortion and find a clinic.’

Penalties for protesting within the 150 metre ‘access zone’ around abortion clinics have also been amended, with the maximum fine dropping from $60, 000 to $9750. However, a maximum of 12 months imprisonment is still in place for those breaking this new law.

These progressive reforms come as a win for the Tasmanian Labour Party, in what has previously been an unsuccessful campaign for social reform, with voluntary euthanasia and same-sex marriage bills failing to pass.

One thought on “in brief: Tasmania to decriminalise abortion”