in brief: the banning of leggings at school induces protests in teenage girls 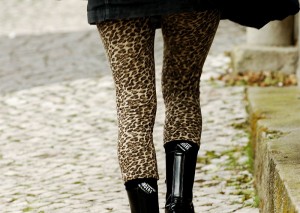 Middle-school girls at Haven Middle School, Evanston, Illinois, are picketing this week for their right to wear leggings to school.

The school informed the young teens this month that leggings are ‘too distracting to boys’ to be fit for the classroom.

Thirteen year old, Sophie Hasty, told the Evanston Review that her and 500 other students had signed a petitions contesting the rule, and last week female protestors at the school reported to class wearing leggings and yoga pants, holding signs saying ‘Are my pants lowering your test scores?’ and other protest slogans.

‘Not being able to wear leggings because it’s “too distracting for boys” is giving us the impression that we should be guilty for what guys do,’ Hasty said.

While the school has told parents that ‘if leggings are worn, a shirt, shorts, or skirt worn over them must be fingertip length,’ some students are simply being told they’re not allowed to wear leggings at all.

One parent, Julia Bond, said that the students who are getting disciplined for their choice of pants ‘tended to be girls who were more developed.’

While these claims are being taken into account, school and district administrators have said that the dress code will be rehashed at a meeting later this month ‘in an effort to ensure consistency in terms of guidelines and enforcement across schools.’