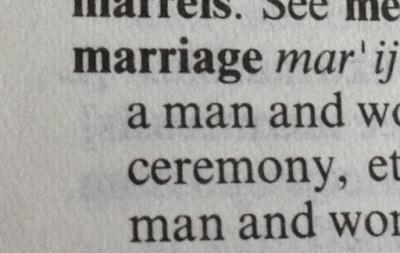 Gay marriage will be in the next printed edition of the Oxford English Dictionary as a secondary definition.

It will read: ‘(in some jurisdictions) a union between partners of the same sex.’

The primary definition remains ‘the formal union of a man and a woman, typically as recognised by law, by which they become husband and wife.’

‘We continually monitor the words in our dictionaries, paying particular attention to those words whose usage is shifting, so yes, this will happen with marriage’, an Oxford spokeswoman told Gay Star News.

One question remains: is it discriminatory to have heterosexual marriage as the primary or first type of marriage listed and gay marriage as a secondary reference? Or is that just nit picking? Personally I like the Canadian gender neutral definition of marriage, simple and quibble free. ‘The state of being a married couple voluntarily joined for life (or until divorce).’

What do you think about the redefinition? Are there other words you’d like to see redefined?