in brief: three ohio women rescued after a decade in captivity 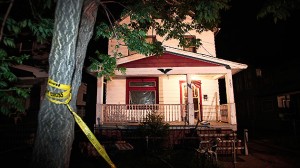 A decade ago, three young Cleveland women went missing.  In 2002, 20-year-old Michele Knight disappeared.  In 2003, 16-year-old Amanda Berry called her sister to let her know that she was getting a ride home from work.  She never made it home, and the day after her disappearance, the Berry family faced her 17th birthday without her.  On the 2nd of April, 2004, 14-year-old Gina DeJesus went missing while walking home from school.  The three women have now been found, safe and sound, rescued from their prison in downtown Cleveland.

On Monday, Charles Ramsey  heard screaming and went to investigate.  He found Berry, and a young child, shouting for help.  With another witness, Ramsay managed to break the bottom of the door, and rescue the kidnapped women.

‘I barbecue with this dude,’ Ramsey said. ‘We eat ribs and what not, listen to salsa music, you see where I’m coming from? Not a clue that that girl was in that house, or anybody else was in there against their will.’

The young women and the child have now been provided with medical care, and are reported to be in a fair condition.  They have been reunited with their remaining family and friends.

Police have confirmed thatAriel Castro, 52, Pedro Castro, 54, and Onil Castro, 50 have been arrested as suspects in the case. Neighbours claim to have made several calls to authorities regarding suspicious activity at the house; however, police say they only have record of one visit, on an unrelated matter.

Lip Magazine will have more on the story, and the surrounding media coverage, in the coming days.

An interview with Ramsey and the initial 911 call can be accessed via cleveland.com, a 24/7 news network bringing the latest news in northeast Ohio.

One thought on “in brief: three ohio women rescued after a decade in captivity”