in brief: women and families make up one third of australia’s homeless population 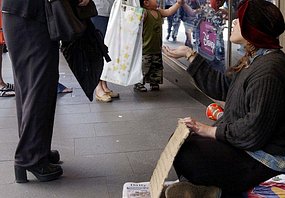 A new study by Wesley Mission has found that women and children are becoming a pronounced presence in the homeless demographic.

Wesley Mission provides support for those at risk of homelessness in Australia.

The Homelessness and the next generation study also found that one in five people who were surveyed sought shelter from domestic violence. The report suggested that many considered homelessness to be safer than their home environment.

The shift in the demographics of those affected by homelessness has resulted in the need for an overhaul of the approach to issue, says CEO of Wesley Mission the Rev Dr Keith Garner. ‘If we are to adequately address the major issues, it is the experiences and concerns of families and children that need to inform service delivery and policy reform.’

The study showed that being homeless as a child has serious long-term implications for an individual, hence the need for a unified and strong approach to tackle the problem. One participant said that after many years of ‘normal’ functioning, she experienced an extremely stressful time in her life and found herself in the same place she had been when she was a homeless young person. According to the Mission’s report, she ‘found herself trying to find a blanket and contemplating sleeping under the bridge where she had slept as a child.’

Dr Garner stated that the needs of those affected by homelessness are changing, and need to be met swiftly. ‘Common sense tells us we can’t have nearly a third of the people presenting in a homeless situation as families and be able to meet that need, bearing in mind that when those 20,000 houses were built that only 3 per cent of them have more than two bedrooms,’ he said. ‘We need to find more places where families with two, three or four children can actually find some settled place.’

Garner attributes changing face of homelessness in Australia to the shifting attitude towards domestic violence. Women are recognising that violence should not be the norm, and are trying to move their families out of that environment.

Garner called on the community, as well as the various levels of government, to help tackle the situation.