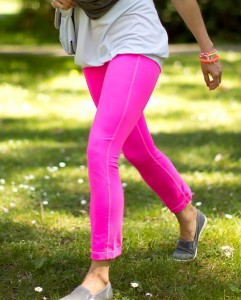 Lululemon make athletic apparel for yoga, running and dancing and have been rapidly growing as a company since their establishment in 1998.

Their aim is ‘to create athletic gear that’s perfectly suited for each activity.’ Apparently not for each body type or shape, however.

Lululemon have been inundated with complaints in recent months with women having issues with torn seams, piling, or see-through fabrics. In a rebuttal that has provoked noise over the past week, founder of the company, Chip Wilson, has stated that ‘frankly, some women’s bodies just don’t actually work for it. It’s about the rubbing through the thighs and how much pressure is there.’

A fitness instructor at the University of Miami has posted a photo on Lululemon’s facebook page showing exactly how unrealistic it can be for women, and especially athletes in this case, to not have ‘rubbing through the thighs’.

The Daily Mail has reported that ‘A top cosmetic surgery clinic in the UK said it had seen a 240 per cent rise in demand for a fat-freezing treatment on the inner thigh area.’ An alarming number of people are also using social media networks to show ‘thinspiration’ images. With some 700,000 users following facebook and twitter accounts dedicated to the ‘thigh-gap’.

In a move that is again sure to stir the pot, Chip Wilson has posted this message (teamed with strong, watery, eye contact) on Lululemon’s YouTube channel apologising for his comments.

One thought on “lululemon founder slammed for body-policing comments”