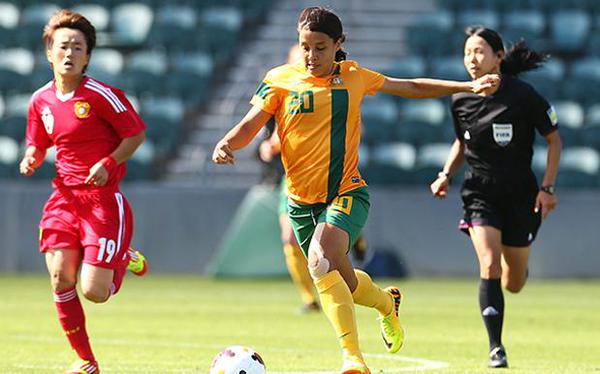 After surviving the so-called ‘group of death’, Australia’s Matildas are through to the round of 16 of the Women’s World Cup in Canada. However, they’ll have to face soccer superstars Brazil if they want to reach the quarter-finals. This is a step forward for women’s sport in Australia, but there’s still a long way to go before it is on par with men’s sport.

Australia’s games in the FIFA Women’s World Cup have been broadcast live on SBS, with an all-female match panel, including Jo Peters and Sally Shipard, along with host Lucy Zelic. David Basheer is left to be the token male in the commentary box, alongside Heather Babcock. Big names in the Australian soccer community, such as former players and now presenters Zelic and Craig Foster, are calling this a ‘giant step forward’ for the Matildas and, more widely, women’s sport in Australia.

It’s interesting to compare this with the coverage that the male team, the Socceroos, received when playing in the World Cup last year in Brazil. The Matildas are ranked 10th in the world, and have reached the quarter-finals in the last two World Cups. Although they have lost to the U.S., who are considered powerhouses in women’s soccer, they have held their own on the world stage, beating Nigeria and drawing with Sweden to advance to the round of 16.

By contrast, the Socceroos, also drawing a ‘group of death’ in last year’s tournament, are ranked 64th in the world. Their achievement at the Cup was arguably playing their best against some of the world’s best, such as Spain and the Netherlands, departing in the group stage. If we look objectively at the two teams, the mainstream media coverage couldn’t be more confusing. There has been little fanfare for the Matildas in the news, having often been relegated to a footnote in the sports section – after the men’s AFL, rugby league and cricket.

However, it’s not all bad news. The women’s semi-professional soccer league in Australia, the W-League, was established in 2008 and is affiliated with seven of the men’s counterpart A-League clubs. A weekly game was broadcast on the ABC, however this has been cut for the next season due to budget cuts. Nevertheless, despite much smaller crowds, it appears that the soccer community in Australia is taking small steps to be more inclusive of women in the sport.

Arguably the more established sport in Australia, the AFL appears to be miles behind in terms of women’s engagement. This is disappointing, considering that there is a near even split of men and women watching the sport. Although each state has their own amateur women’s league, they are rarely reported on in the mainstream media. For the first time in August, Channel 7 will air an exhibition match between the Western Bulldogs and Melbourne, which will be a curtain-raiser to the men’s game. While it’s nice to see that these steps are being taken, could it be too little, too late?

The coverage of the Women’s World Cup has highlighted the inequalities in many of our perceptions of men and women’s sport in Australia. Whilst professional sportsmen are usually able to devote their lives to the sport, women in soccer and other football codes are often forced to work separate jobs. The current goalkeeper for the Matildas, Melissa Barbieri, has admitted that she has had to sell merchandise in order to fund her career playing the game she loves. By comparison, the team currently ranked 10th in the world in men’s soccer, Spain, is made up of players earning millions of dollars per season, who wouldn’t dream of such a thing.

In a patriotic country like Australia, where a love of sport appears to be embedded in our national psyche, why aren’t we equally supporting our teams?

The Matildas play Brazil in the Women’s World Cup, live on SBS, on Monday morning at 2.30am (AEST).