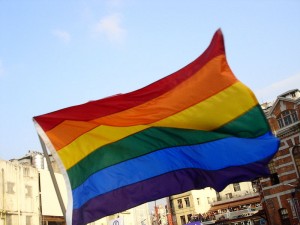 There were jubilant scenes throughout New Zealand and across Australia last night as NZ became the 13th country in the world to legalise same-sex marriage. The legislation, which passed 77-44, redefines marriage as a union between two people, and opens the door for adoption by same-sex couples.

Labour MP Louisa Wall, who introduced the Bill, said: ‘In our society, the meaning of marriage is universal – it’s a declaration of love and commitment to a special person.’ She added that ‘nothing could make me more proud to be a New Zealander than passing this bill.’

Lawmakers took part in a conscience vote to pass the legislation, which was backed by centre-right Prime Minister John Key.

‘In my view, marriage is a very personal thing between two individuals,’Key said. ‘And, in the end, this is part of equality in modern-day New Zealand.’

As the Bill was being passed across the ditch, Australian Prime Minister Julia Gillard again rejected calls for a change in her party’s position on the matter.

The law is due to come into effect in four months. Couples both in NZ and Australia have begun planning their weddings, though the unions will not be recognised under Australian law.

Australian Marriage Equality national convener Rodney Croome said that since Friday, more than 1000 gay and lesbian Australians have indicated that they would travel to NZ to wed. He predicted a “tourism boom” for the pacific nation. He added that: ‘The majority of Australians who support marriage equality will be happy for New Zealand but deeply embarrassed their own country is lagging so far behind.’

‘This will be a game-changer in Australia because of the close links between our two countries.’